Yehuda “Yavda” Abramov, who is accompanying Azerbaijan’s Foreign Minister Elmar Mamadiarov on his visit to Israel, is apparently the only Jewish Member of Parliament in the entire Muslim world. 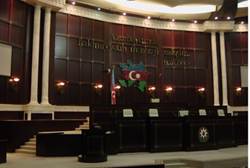 Abramov, who is also the chairman of the Israel-Azerbaijan Inter-Parliamentary Committee, told Arutz Sheva he does not see anything extraordinary about his status.

“I do not see anything special in the fact that a Jew serves as a member of parliament in a Muslim country,” he explained. “In our country, there is a complete equality of rights between citizens, and anyone can be elected. I am a member of the ruling party, which is headed by the president, whose father was one of the founders of the state.”

Abramov, 65, hails from what he says is the last Jewish village in the world outside Israel – Krasnya Sloboda, near the city of Kuba. He was a history teacher there, and was elected to the post of councilor before becoming an MP.

“I was not elected by Jewish citizens,” he stressed. “I also do not feel like a representative of the state of Israel, but as a bridge between Azerbaijan and Israel. Azeri-Israeli relations are good, both diplomatically and politically. There is a very good friendship between the countries. I have no doubt that the currently visiting delegation will bring about a fundamental change in the relations between the countries.”

Abramov said that he always excited to be in Israel. “My children live in Israel, and I try to come to the Land of Israel at every opportunity.”

The delegation was also joined by the head of the Ashkenazi community in Azerbaijan, Kandi Zalmanovich, and the head of the World Federation of Caucasus Jews, Medvi Ylazarov, who told Arutz Sheva when he was still on the flight to Israel, “The dream of all the Azeri Jews in Israel is that an embassy will be opened in Israel. This matter will be on the agenda in the visit, and I expect it to happen soon.”

Newscom Reform of the U.S. arms export control took a major step forward this week when the Departments of State...