ROME, ITALIA (LifeSiteNews.com) – In his first encyclical letter, released this morning, Pope Francis has reiterated that marriage is a union of one man and one woman for the procreation and nurturing of children. 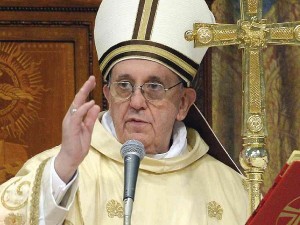 This lifelong pledge is possible only in the light of a greater plan for marriage, he said: “Promising love for ever is possible when we perceive a plan bigger than our own ideas and undertakings, a plan which sustains us and enables us to surrender our future entirely to the one we love.”

Titled Lumen Fidei (The Light of Faith), the encyclical is known to have been authored mainly by Pope Emeritus Benedict XVI, who was still working on it at the time of his abdication and it strongly reflects the theological style of Francis’ predecessor. In his introduction, Pope Francis wrote that he merely “added a few contributions of my own.”

Section 52, on Faith and the Family, calls the family the “first setting in which faith enlightens the human city.”

“I think first and foremost of the stable union of man and woman in marriage,” he said. “This union is born of their love, as a sign and presence of God’s own love, and of the acknowledgment and acceptance of the goodness of sexual differentiation, whereby spouses can become one flesh (cf. Gen 2:24) and are enabled to give birth to a new life, a manifestation of the Creator’s goodness, wisdom and loving plan.

“Grounded in this love, a man and a woman can promise each other mutual love in a gesture which engages their entire lives and mirrors many features of faith. Faith also helps us to grasp in all its depth and richness the begetting of children, as a sign of the love of the Creator who entrusts us with the mystery of a new person.”

Anthony Ozimic, communications manager for the Society for the Protection of Unborn Children told LifeSiteNews.com today, “The Pope is linking being pro-life with having a correct understanding of the true nature of marriage. His words will be of great assistance to pro-life organisations who are fighting homosexual ‘marriage’. We know that the homosexual attack on marriage is an attack on the family, which is the best protector of children, both born and unborn.”

Ozimic said that although the section of the encyclical on the subject was short, only a few paragraphs, it is a “significant” aid in the struggle against the global efforts by the homosexualist lobby to dismantle legal definitions of marriage.

“The message from Pope Francis in his first encyclical is that the life-bearing potential of heterosexuality is the prerequisite of marriage,” Ozimic said.

The letter has made clear that “the type of love required for marriage” is not that promoted by the modern media or the sexual revolution, “of sexual desire and personal satisfaction, but a complementarity between the sexes leading to total mutual self-giving and thus openness to the responsibility of parenthood”.

Paragraph 53 says, “In the family, faith accompanies every age of life, beginning with childhood: children learn to trust in the love of their parents.

“This is why it is so important that within their families parents encourage shared expressions of faith which can help children gradually to mature in their own faith.”

In Case You Missed It:  We warned of a global supply chain disruption, and now it's here: Workers who keep things moving are now sounding the alarm that a "systemic collapse" is too close for comfort
Posted in Freedoms and tagged Europe, Freedom, Italy.

As a reminder: jobs have quantity and quality components. The quantity component was good enough to convince the 10 Year the taper...