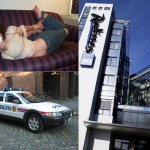 The number of police reports concerning rape in Stockholm has increased by 16 percent so far this year. A large part of the increase involves the rape of young girls. The National Crime Prevention Council published the statistics today. More than 1,000 rapes have been reported in the county during the first seven months. A large part of the increase of rapes concerns the rape of girls under 15. According to BRA police in the county received 300 such reports so far this year.”

19 Disturbing Facts on Illegal Immigration that Every American Should Know

Should we roll out the red carpet and allow millions upon millions of thieves, rapists, gang members and drug dealers...