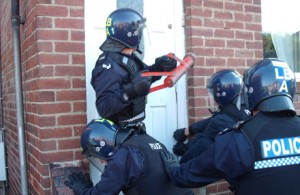 A new provision hidden away inside the Obamacare bill will allow government forces to carry out forced home inspections.

According to an Obamacare provision millions of Americans will be targeted.

The Health and Human Services’ website states that your family will be targeted if you fall under the “high-risk” categories below:

There is no reference to Medicaid being the determinant for a family to be “eligible.” In 2011, the HHS announced $224 million will be given to support evidence-based home visiting programs to “help parents and children.”

Clearly, any family may be visited by federally paid agents for almost any reason.

“This is not a “voluntary” program. The eligible entity receiving the grant for performing the home visits is to identify the individuals to be visited and intervene so as to meet the improvement benchmarks. A homeschooling family, for instance, may be subject to “intervention” in “school readiness” and “social-emotional developmental indicators.” A farm family may be subject to “intervention” in order to “prevent child injuries.” The sky is the limit.

Although the Obama administration would claim the provision applies only to Medicaid families, the new statute, by its own definition, has no such limitation. Intervention may be with any family for any reason. It may also result in the child or children being required to go to certain schools or taking certain medications and vaccines and even having more limited – or no – interaction with parents. The federal government will now set the standards for raising children and will enforce them by home visits.”

Part of the program will require massive data collecting of private information including all sources of income and the amount gathered from each source.

In Case You Missed It:  “You Got Child Pornography on that Hard Drive – The Pictures of the Young Girl with No Clothes On” – Rudy Giuliani Speaks Out on Hunter Biden’s Laptop (VIDEO)
Posted in Freedoms, Tyranny and tagged Freedom, Health Care Reform, Obama, Obamacare.