Bashar al Assad marked his 48th birthday Wednesday, gifted with the momentum gathering behind a Russian-brokered deal that could prevent a U.S.-led strike on his regime. 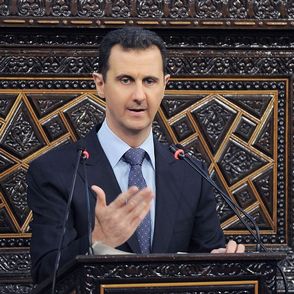 Despite the fact that over 100,000 Syrians have been killed in the country’s civil war, with two million having fled and a further four million citizens displaced inside the country, the Russian plan that would see Assad cede his chemical weapons arsenal to the international community, looks set to lengthen Assad’s grip over the country.

Meanwhile, rebel forces in Syria have reacted angrily, describing the Russian plan as a “dirty deal” that ignored the plight of the Syrian people.

In a report carried by the Al Arabiya news agency, Colonel Abdul Jabbar al-Oqaidi, a senior commander in the Free Syrian Army, rejected any political solution to the crisis before Assad’s departure and urged Syrians to unite around the rebel army and not rely on international support to overthrow the Assad regime. He described the plan as an “international maneuver,” charging, “What is happening is an attempt to save Obama from a tree he climbed, after Russia left him there and took the ladder.”

“All of this shouting in the international community is because of the chemical weapons and not because of Assad’s atrocities against his people using tanks and rocket launchers,” he added.

In the U.S., Barack Obama said he welcomed the Russian plan with caution, but nevertheless delivered a speech Tuesday pushing the case for a military response to Syria’s alleged use of chemical weapons on August 21. Congress must now decide whether to approve a strike.

Why This Doctor Fears Obamacare

Dr. Tim Shepherd talks about his patients like they’re his own family. He gets emotional when he thinks about a...