Various groups want US state secretary to stand-up for non-Muslims and those of other sects during his visit to Malaysia.
PETALING JAYA: Thirteen organisations representing various faiths in the United States have lobbied for US State Secretary John Kerry to rap the Malaysian government for curbing religious freedom.The group, in a letter dated Oct 2, said Malaysia had presented itself as a model, moderate Muslim-majority country but its politics were often not tolerant of those from other faiths.

“Too often, however, politicians leverage on Islam and manipulate the Malays into believing those of other faiths as the bogey man to draw support from the majority Malay Sunni Muslim population, leaving many ethnic and religious minorities with the looming fear that they would be marginalised and without legal recourse when their civil liberty was violated,” the group said. 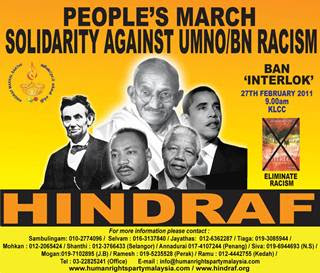 However, such discrimination and violation were not only imposed on those of other faiths but also on Muslims of other sects which saw 21 Syiah Muslims detained since last month.

“Non-Muslims and dissenting Muslims are often barred from voicing their concerns, and threatened with death, detentions, or attacks by vandals who had been brainwashed into despising other faiths and sects,” the letter said.

To illustrate the point, the group had bought to the attention of Kerry the various instances such as – marriages between a Muslim and non-Muslim, and parental rights of the children in a divorce where a spouse embraced Islam after marriage – where the Malaysian government had discriminated against the Christians and Hindus.

The group also informed Kerry of the countless Hindu temple demolished or desecrated and the barring of Christians from using the word, “Allah.”

Kerry, currently in Bandar Seri Begawan, Brunei, is expected to visit Malaysia later this week after US President Barack Obama cancelled his trip to this region due to the partial government shutdown in the US.

Wayna Moorthy of HINDRAF, leading the civil rights struggle for Malaysians of Indian origin who are presently second-class citizens int heir own country

In Case You Missed It:  UNANSWERED QUESTIONS: Why has there been ZERO video footage of the raids on the US embassy in Afghanistan or interviews with Americans supposedly rescued by the Biden Regime?
Posted in Freedoms, Terrorism and tagged HIndus in Malaysia, Jihad, Malay racism, Malaysia, Moorthy.