Just one week after he was released from an Israeli prison, Hamas leader Hassan Yousef said on Sunday that a third Arab armed uprising – or intifada – is just a matter of time. 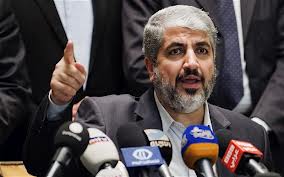 Speaking to Channel 2 News, Yousef said that Palestinian Authority (PA) Chairman Mahmoud Abbas does not represent anyone other than himself.

“All the organizations of the Palestine Liberation Organization, as well as Hamas and the Islamic Jihad, are opposed to negotiations with Israel,” he declared.

“The intifada will not wait for anyone,” warned Yousef. “If it doesn’t happen today then it will happen tomorrow, if not this month then next month. Eventually – just as the First Intifada and the Al-Aqsa Intifada broke out – another one could break out.”

Yousef also warned Israel against starting a war in Gaza in response to the increased rocket fire at southern Israel in recent weeks.

“It would be madness if Israel launches a war with Gaza,” he said, adding that “media reports in Israel that Hamas is upgrading its military abilities and experimenting with missiles in the sea will make some of the Israeli people go underground.”

Yousef’s son is Mossab Yousef, who admitted spying for Israel between 1997 and 2007.

Mossab relocated to the United States, changed his name to Joseph and converted to Christianity. He wrote about his experiences in a book, Son of Hamas, and addressed the Knesset last June.

Hassan Yousef disowned his son in a letter sent during a previous term in an Israeli prison.

His remarks come hours after an official with Hamas’s longtime rival Fatah, headed by Abbas, called to renew terrorist attacks on Israel.

Fatah Central Committee member Tawfik Tirawi reportedly told the Lebanese Al-Mayadeen network, which is affiliated with Hezbollah, that there will be no new Arab state in Judea, Samaria and Gaza in the near future, and not even in 20 years. For that reason, he said, Fatah must resume the “violent uprising” against Israel – meaning terrorism.

“That’s the only way things will change,” he argued.

Fatah must “join all of the organizations, both those operating under the Palestinian Authority, and those outside it,” he added, in an apparent reference to Hamas and Islamic Jihad.

The President Won’t Be Needing You

President Obama says this is a “year of action”—and last night he made it very clear whose action he was...