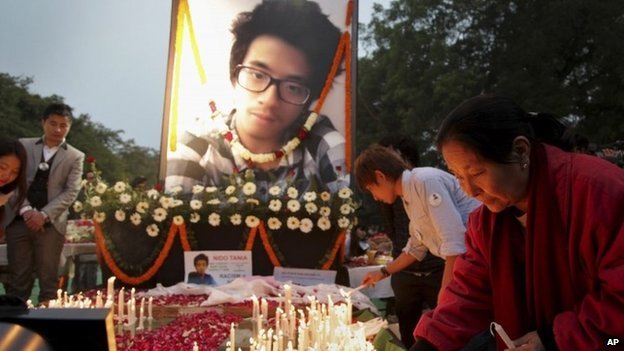 Campaigners in India are pushing to introduce anti-racism legislation after the recent killing in Delhi of a college student from north-east India, the latest in a series of apparent hate crimes. India has existing laws that deal with discrimination but none on the basis of race. The BBC’s Sanjoy Majumder reports on why India is being forced to come to terms with the issue.

In a modest flat in Delhi, Nido Pavithra and his wife Marina light a candle in front of a large framed photograph of a young man wearing glasses. Flowers are placed underneath.

It is a picture of their son, Nido Tania, who was killed two weeks ago in an apparently racially-motivated attack.

The police say he got into an argument with a group of shopkeepers who made fun of his appearance and beat him so badly that he died.

“I still can’t believe he’s gone,” says Marina Nido, who spoke to her son the night before he died.

“He told me not to worry and that I was the best mother in the whole world. Those were his last words.”

“It was racism pure and simple. He was killed because of the way he looks,” adds the young victim’s father.

It is the latest in a series of attacks targeting people from north-east India, whose physical resemblance is often closer to that of the Chinese or East Asians than to people in the rest of India.

The attack on Nido Tania has sparked outrage and brought protesters out on to the streets of Delhi.

The demonstrators say they will not stop until his killers are brought to justice and the government brings in an anti-racism law.

But those from the north-east of India are not the only community that has suffered racial abuse on the streets of the Indian capital. 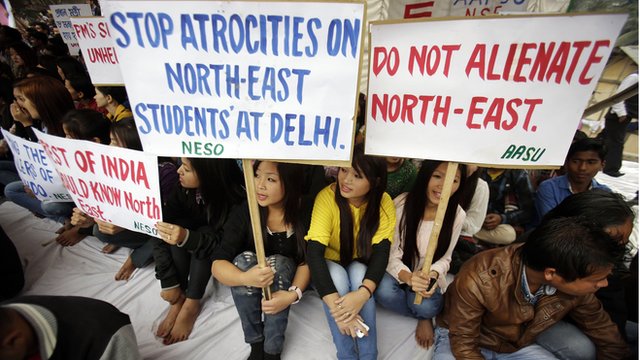 Khirki Extension is a congested neighbourhood in south Delhi, characterised by narrow lanes and houses built so closely together that you can barely see the sun from the street.

Electricity wires hang haphazardly overhead and many of the houses look dilapidated.

But for some time now this area has been home to Delhi’s African community. Some call it Little Africa.

“They moved in here a few years ago, attracted by the fact that they could get cheap housing,” one long-term resident, Ashok Yadav, says.

But not everyone welcomed them.

“They would get into fights, there was drug dealing going on,” alleges Mr Yadav.

“Many of the women would solicit customers for the sex trade right on the street,” he adds.

So last month, a Delhi government minister led a raid on a house in the neighbourhood. Three Ugandan women were arrested and accused of being sex workers.

But the incident unleashed controversy, with many believing it was a case of racial stereotyping.

Many of the Africans moved out or went underground. The few you can spot on the street scurry away or refuse to speak to you.

After a series of phone calls and text messages, I am able to convince a group of Nigerian students to talk to me.

We meet on the roof of their apartment building, a secluded spot far away from the street.

They tell me about their experiences.

“They call us all sorts of names,” one of the Nigerians tells me, a musician with his dreadlocked hair tied back.

“We are called bamboos, chimpanzees. They spit on us. When we go down to play football, they throw stones at us,” he says.

“It was not what I was expecting when I came to India,” says his heavy-built friend, a baseball cap pulled low over his eyes.

“I’ve been to Brazil, Argentina and Netherlands. But India is terrible.”

He too was a victim of a racially-motivated attack. He was assaulted when he was out with a friend – they were punched and his friend’s glasses were smashed.

“I was so happy to be coming here. But now I want to go back,” he says. 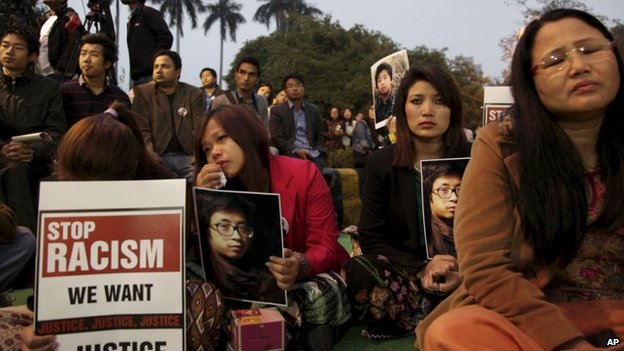 Few Indians acknowledge that there is racism in the country.

“It’s just a difference in culture,” says one Indian I speak to. “Nothing to do with racism.”

But Pradyot Debbarma, a politician from the north-eastern state of Tripura who is campaigning for an anti-racism law, believes it is time Indians recognise they have a serious problem.

“We need to realise that until we treat the whole of India as one, respecting all cultures and its diversity, we will have problems,” he says.

“There is a sense among Indians that we cannot be racist, we have been victims of racism. The British were racist towards us during colonialism.

“But how long will we blame others? We are racist, let’s accept it.”

Since Nido Tania’s death, two other north-eastern students have been beaten up in an apparently racially-motivated attack.

And one of the Nigerian students I spoke to, the musician, is leaving India without completing his studies.

“My family don’t want me to stay in India another day,” he told me on the phone before leaving.

Even though this debate has only just begun, it is clearly a matter that needs to be tackled urgently.

In Case You Missed It:  Coffee contains hundreds of medicinal compounds that may prevent cognitive decline
Posted in Freedoms and tagged India, nigerisn, north-east India., Racism.