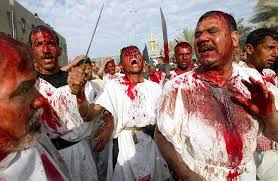 Fourteen centuries hence, in a cramped 12 x 5 foot cave known as Hira on a mountain called Jabar-al-Nour on the outskirts of Mecca, it is said that a young illiterate orphan prone to epileptic fits from his youth beheld an angel named Gabril hovering over his paralyzed body. It was here that the young man received the beginnings of the “recitation:” the Qur’an.  From the culled together testimonies of his life, or Hadiths, we learn from his faithful that Mohammad was a large man with pronounced hands and features and was given to possess a strong bodily smell and often profuse sweating – even in the cold.  As a boy, he had once fallen into a catatonic state while playing.  Afterwards, he reported to others that in his dream state, jinn were pulling objects from his insides. Many years later, after fleeing terrified from the aforementioned Cave of Recitation, Mohammad sought to fling himself from the mountain before he was “restrained” by the angel and told of his mission. Unable to ascertain whether he was mad, the object of demonic trickery or a fateful blessing, Mohammad ultimately transformed himself and the Earth: first by assuming the persona of a Warrior Prince only slightly less venerated than Allah and eventually by exhorting his acolytes to scour the earth and propagate through the sword God’s Temporal Kingdom.

Whether the Founder of Islam was in truth: a prophet, a charlatan, or a schizophrenic depends upon how you view Mohammad and the Divine Character of God. What is known is that Islam had begun as a movement to eradicate pagan idolatry and to perhaps consolidate a common ground for an Arabic conversation between Christianity and Judaism. That conciliatory attitude was soon lost as the Prophet encountered obstruction from Mecca’s Great Houses: including the three Jewish tribes of Arabia. To the learned, it seemed as if Mohammad’s visions from the angel were merely fifth-hand badly mangled stories from the Gospels and Torah that he had acquired on his many caravan sojourns while trading.  It soon became clear to many that the “Seal of the Prophets” was either possessed or a megalomaniac – causing him to eventually flee unceremoniously for his life (the Hegira) to Yatrib (Medina) when the fiery content of his evolving teachings and messianic grandeur became even more bellicose.

Indeed, this new religious vision that had once featured an accommodating affinity for Monotheism’s “Peoples of the Book” soon became the call to subjugate and eradicate the enemies of Allah (a primordial Moon Deity) and those who would dare blaspheme and ridicule the name of his Prophet.  What had transpired in the mind of the Mohammad during his passage to exile and destiny?  Was the great transformation (since theoretically, God is changeless and not capricious) one of calculated expedience or had he surrendered to a dark brooding spirit of self-serving madness and all of its accompanying ghosts?

It is this great turning point in the tone of the Qur’an that causes such a cognitive dissonance in the minds of those external to the mystique of Islam, and furthermore, causes the objective intellect to wonder what befell the character and doctrine of the Prophet. The same charismatic but haunted man that fled away into the desert was not the one who eventually returned in martial triumph.  Having drawn a core of the faithful to himself by purchasing loyalty with the booty of plundered caravan riches, Mohammad and his army of mercenary zealots would brook no dissent to his supernatural edicts that metastasized into the Islamic faith.  Upon consolidating political power, no brazen poet or mother suckling an infant who questioned the pedigree of his righteousness would escape with their lives. It is said that Mohammad’s divide and conquer strategy aimed at Arabia’s three powerful Jewish tribes — which would ultimately lead to expulsion, forfeiture of immense wealth and finally extinction — stemmed from a bitter Jewish malice he could not forsake. After what is known as the portentous “Battle of the Trench,” the Prophet sold the defeated Jewish women and children into slavery and divided the people’s considerable substance. It is said that Mohammad wore a white veil while he looked on as all of the 900 males of the last remaining Jewish tribe, the Banu Qurayza, were beheaded into a pit. With this pivotal victory, the character of Islam changed and the methodology for Holy War which included: confiscation, slavery, conversion, rapine, dhimmitude and territorial expansion for Allah were therein set into stone.

Medical historians have eyed the figure of Mohammad as a puzzling one by diagnosing his personality as manifesting narcissism, schizophrenia and paranoia – all perhaps due to his status as an orphaned youth or in conjunction with epilepsy.  While he could be magnanimous, he was often given to: mood swings, rage, severe anxiety and mistrust, hyper-sexuality and profuse sweating that accompanied his convulsions.  It was said that during these “vision states” he would foam at the mouth while “bellowing like a young camel.” Moreover, as the cherished Prophet of Allah, he held himself far above the common man.  While the average Muslim was limited to four wives, he was reputed to have had more than a dozen, and sealed this exception to God’s mandate with a convenient vision. As the prophetic mouth of Allah, his every word established law which he firmly buttressed with an expedient utterance from the angel. As a being who became beyond good and evil, he routinely: broke faith with treaties, lied, codified slavery as God-sanctioned, urged his warriors to mercilessly pillage, murder and rape with impunity, and gave license to sexual gratification with mere children. Verily, he exalted his will above all past custom by setting into motion a wave of human-wrought pestilence that would spread its reach into Central Europe within a century of his death.

When his warriors become too comfortable and wanted to rest in the luxury of their plunder, he sanctified Allah’s imperial expansionism by evangelizing his faithful with lustful figments of a warrior paradise where 72 doe-eyed virgins and young boys would attend those who died as martyrs – therein cementing a fundamental dogma that has existed throughout Islam’s aggressive history.  By lowering the nature of heaven into that of a divine brothel, Mohammad’s theology characteristically legitimizes what is carnal and worldly.  Mohammad’s God, both aloof and arbitrary, provokes through fear rather than love and eschews the self-denying transcendence of spirit for the sensual pleasures of flesh-bound men.

The same schizophrenic dichotomy that seems to cleave the personality of the Historical Mohammad is present in the Qur’an itself.  If one takes the time to read it, one quickly understands that it does not follow a linear style and its nature is extremely bewildering. As such, the reader can find many verses, or suras, that are consistent with themes of justice, tolerance and virtue as well as an overabundance of warrior prose that threatens the worst forms of punishment to the unbeliever— both in this world and the next. Many of us know Muslims who seem to be good and moral individuals and we also are aware that over one hundred million people sympathetic to the Islamicists wish to subject us to the conquered and inferior status of dhimmis. How, therefore are we to make sense of this Janus-faced book that seems to be all things to its adherents?

According to the classical/fundamentalist jurists of Islam who have long interpreted the Qur’an, the book itself cannot be understood without aid of the Doctrine of Abrogation: the notion that the more recent verses of Mohammad abrogate or cancel out the earlier ones.  Consider Sura 2:106:

When we cancel a message, or throw it into oblivion, we replace it with one better or one similar. Do you not know that God has power over all things?”

This doctrine, perhaps founded as a means to reconcile the incoherency between the earlier and later verses, divides the Prophet’s teachings into periods where Islam was at first militarily weak and then ultimately ascendant.  Thus, the teachings of Islam which are benign and conciliatory are superseded by “Islam Triumphant” that were revealed at Medina and the final years before Mohammad’s death. In truth, Mohammad’s visions and actions evolved on a continuum beginning with: restraint, followed by permission to enter into defensive conflicts, and finally by sanctioning aggressive jihad to fight the infidel wherever he might be found.

In Chapter 9 or the sura known as “Ultimatum,” the Prophet, who had grown strong through making treaties with neighboring peoples, supposedly received this final stage of teachings and promptly broke faith with peace when events dictated his military advantage. Scholars claim that this sura abrogated 123 previous verses and made Holy War an obligatory article of the faith.  Thus, “Let there be no compulsion in religion” was cancelled by admonitions to fight against unbeliever’s (atheists, polytheists)  and the Peoples of the Book (Christians, Jews) until they embrace the faith or pay the Jizya (tax).  It is therein possible to both claim that Islam is a religion of peace and a religion of aggressive imperial designs by pointing to the individual suras of the Qur’an and still be telling the truth. In this way, those advocates of “peaceful coexistence,” such as CAIR and multi-culturalist leaning university professors, can point to the moral superiority of Islam through the transcendent definition of “spiritual jihad”; even as 22,000 acts of Islamic terror have been committed throughout the planet since 9/11.

How does one go about reconciling the true belligerent face of Islam with the mask handed out for public consumption in the West? How does Islam, which deems its faithful the most blessed of the earth, account for the eternal strife that exists between father and son, tribes, and nations who have devoted themselves to the Crescent and Star? How does Islam explain that it cannot transmute the Prophet’s blessing for happiness, concord or an intellectual, social and economic vitality since even the salvation of oil has been wrestled into a black curse that seems to confirm the Biblical Prophecy concerning the Sons of Ishmael? For the Children of Mohammad, what was birthed in blood, strife, and war – remains so. As Marcus Aurelius remarked, it is madness to assume that a fig tree should not produce figs.

The Politico-Theologico schizophrenia that permeates the 57 nations of Islam today is symptomatic of the teachings of the Qur’an and Hadiths; and they themselves are the consequence of the enigmatic Prophet who provoked more fire and blood than moral virtue.  The Bible tells us that The Devil can appear as an “angel of light” and that we are called upon to test all spirits. And yes, we can know a tree by the character of the odious fruit it brings forth. If a House divided against itself cannot prevail, then Islam will one day fall—a victim of its own incoherent misapprehension of God’s loving Personality as it violently consumes others while inadvertently poisoning itself.  In the end, Islam’s final abrogation may be Islam itself:  tearing itself asunder as the apocalyptic fulfillment of the Prophet’s darkened zeal – and with no angel forthcoming to intervene it as it hurls itself over the precipice.

Glenn Fairman writes from Highland, Ca.  He welcomes your correspondence at [email protected]. He can be followed at www.stubbornthings.org and on Twitter.