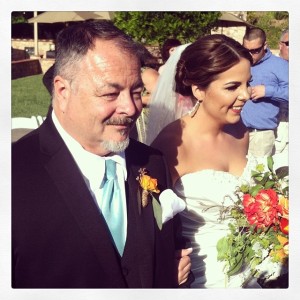 Can I share a secret with you?    Being young isn’t all that it’s cracked up to be.

It wasn’t till I had reached the leeward side of 50 that I started figuring things out.  Believe it or not, there is a joyous virtue in age if you are ready to throw down your gavel, open up your heart, and be willing to start again as a child. This is the paradox of growing old.

Nevertheless, this can be a turbulent interval in one’s life that has the capacity to knock you over if your feet are not set squarely on the ground.  It is a time of momentous endings and beginnings — a melancholy season of burying your parents balanced by the exuberance of watching your children marry and begin their own families – sometimes in the same week.  By then, you have developed enough tenacity to correct your course and to become that person you always swore you would be.  By then, the tragedies of inflated expectations have been acknowledged and hopefully reconciled.  If one is blessed, he is then prepared to become that rarest of human commodities: “the genuine article.” But to accomplish this feat he must allow for one thing as he reaches these crossroads: he must prepare himself to love exceedingly, and to be loved in turn.

In a few days, I will be walking my only daughter down the aisle and I could not be more elated.  There is an immense sense of satisfaction in arriving at a milestone such as this — watching my little one, the apple of my eye, go forth into the mysteries of marriage.  This is a dual milestone for her also, having only recently earned her Doctorate in Pharmacy — and now her “Mrs.” Degree following so quickly in tow.  When I gaze upon this lovely creature joining together with that young man who has passed muster in so many ways, it will make every steep grade I encountered on the Fatherhood Road seem like speed bumps.  When I give her away to her sworn betrothed, who can doubt that any casual veneer of emotional self mastery will surely peel away?  Memo to self: get a pair of welding goggles to cover up the waterworks.  Trust me, It’s gonna be Niagara Falls, pilgrim.

And yet, what a sea change this feeling of proud release is from when both my children were young.  Although I am assured that Aaron and Melinda were model children through the eyes of others, for some strange reason it seemed as if I was only inspecting for blemishes.  Maybe this malady is endemic to all parents who view their young as extensions of themselves and not novel and precious human personalities.  I remember those times being filled with worry at what they might become or focused on the thousand and one ways they might succumb to error.  Would they fall prey to the same poisons that I chose to bury the phantom anxieties that bewitched me – those shadows projected on the wall of my cave that I stupidly assumed were ten feet tall? What a waste it was to exaggerate those petty molehills into an insurmountable Mt. Everest.

If I could tell my daughter anything on the eve of her nuptial, perhaps it would be this: have mercy upon one another.  How many marriages have run aground on the rocks of impossible expectations because one’s partner would not dance to some predetermined tune?  How incrementally a casual unkind observation can morph into a rapier thrust or an insignificant puddle of mistrust expand into a yawning ravine of fiery alienation.  The human tongue: the fickle organ that pleads love and breeds enmity, with hardly a stutter in between, has the infinite capacity to burn and soothe –depending upon the wellspring that nourishes it.  Children:  let your bitter and careless words be few and far between to one another.  Those thoughtless words will indeed come back to haunt you all the days of your marriage – with interest.

It seems that for so many young people (and not just the young) the quality of sacredness is virtually absent from their marriages.  So often they come together as flies of a season, mate for a time, and then invariably flutter away from any responsibilities of their pairings with hardly a farewell. In the end, “convenience” becomes the cursed Post-Modern byword of these stillborn couplings: since when the going gets tough, those who have signed on strictly for the pursuit of Eros and a brief time in the spotlight, unfailingly throw down their toys and fly into the arms of another lost soul. Humanity, however, was made for something far grander. Finding the true source of this beauty makes all the difference in enjoying a unique and enduring union. But this takes time, humility, faith, and no small amount of humor.

I know I am politically incorrect here, but there is a bittersweet sense of loss in giving away one’s daughter in marriage, and I am not sure if this is either a cultural holdover from the days when offspring were little more than chattel or if it is because the character of the relationship itself is rooted deeply within the sinews of nature.  Perhaps within the unspoken language that exists between father and daughter there is that primal knowledge that the former must fall off into the shadows, while the latter joins hands with the future in a wonderful new cycle of being.  For sons this is not the case, at least with respect to their fathers.  As evidence of this, the author Sarah Ruhl writes:

A wedding is for daughters and fathers. The mothers all dress up, trying to look like young women. But a wedding is for a father and daughter. They stop being married to each other on that day.

Being on hand to witness your children thriving and marrying well is just one of the rewards of middle age. As a younger more foolish man, the joys of family had not yet revealed themselves to me. But with the arrival of hard won wisdom, the filial virtues would come to mean so much more than any selfish plans I had endeavored upon. Family gave meaning to what otherwise would have been a  noxious descent into self. It is not a lie when you hear that children are indeed the crown of a happy man’s life – especially if they grow to be praiseworthy men and women. And this is especially true at the race’s end when one is withered and passing the torch – as is the case now for my wife and her beloved father Harold. Know this wisdom: A father needs those he can play the hero to. He needs children who will laugh with him at weddings and grieve for him on his terminal bed of solitude when all others have turned aside. Not all fathers are worthy of this honor and not all sons and daughters are willing to expend the effort. But through the course of living a modestly sacrificial life, the interplay of divine grace and elbow grease invariably turns the hearts of children towards their fathers – if only to close the circle and to begin again anew.

God promises us great and wonderful adventures to occupy the business of eternity.  But we should not forget that the road to forever passes through today.  Even though evil lurks beyond the bend, there is enough beauty on the proving grounds of earth to hold us over till we close our eyes and awaken on distant and sublime shores.  Much happiness can be had if you know your bearing and where you are bound. Then life at its loveliest becomes as simple as tacking on the quarter wind — and sailing straight on till morning.

Glenn Fairman writes from Highland, Ca. and welcomes your correspondence. He can be followed at www.stubbornthings.org and on Twitter.

Pelosi: Americans Either ‘Tired of’ Or Ignorant of Benghazi

House Minority Leader Nancy Pelosi (D-Calif.) is not interested in helping Republicans uncover additional details on the events in Benghazi...