President ‘Benito’ Obama, the constitutional law expert,  is 0 for 13 before the Supreme Court. Does ‘Benito’ Hussein the Brilliant learn from his mistakes? Oh no. He claims even more executive power.  And if we don’t like it? “Sue me,” he says.  So much for the rule of law and statesmen serving the public interest.  That’s all so yesterday. 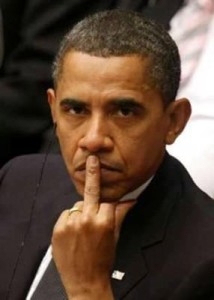 Meanwhile, the Keystone Cops in Congress give themselves a raise, take a full week off for July 4th, play games with travel expenses, exempt themselves from ObamaCare, ‘investigate’ 96 scandals, and spend our money like drunken IRS agents on paid holiday.

The Weeping Speaker threatens to sue ‘Benito’ for being ‘Benito’, then accepts an invitation to play a round of golf, proving again he is only interested in playing around. ‘Benito’ Obama, driving an agenda with wedge issues, knows the Weeping Speaker is putting poorly, but still insists on getting strokes.  No matter how you slice it, polls indicate that people observing the game wish Benito would pound sand in the traps he sets for himself.

The fable of the consent of the governed: Harry Reid and Chuck Schumer want constitutional amendments to shut down free speech coming from conservatives and corporations.  These clowns help orchestrate Benito’s three-ring circus designed to distract you so they can steal your money, then destroy your liberty.  The majority strongly opposes this government’s economic policies; the majority opposes ObamaCare and same sex marriage.  Do the power-mongers care? Nope. Crack a whip, direct the audience to another sideshow, promote the bearded lady, and stuff ‘em full of government cotton candy, all the while talking preventive medicine.

The VA medical system is filled with corruption and mismanagement to the point that vets are dying waiting to see a doctor.  What was once hailed a shining example of the efficacy of government healthcare is revealed as something of a slaughter house. Now we learn that over 10,000 applications for care met up with death panels. Vets who served with honor as volunteers survived combat only to face neglect and a fatal reception back home. This administration provides better healthcare, on our dime, to 90,000 new illegal immigrants flooding across the southern border. Troop morale and national security are not as important as promoting sodomy, dodging Benghazi, and campaigning against all forms of traditional decency.

President ‘Benito’ Osama or is it Obama…promotes the ‘honor’ system, telling ObamaCare enrollees to provide accurate information to secure subsidies.  The system is abused, adding billions in cost.  He tells illegal immigrants to honor the ‘honor’ system and voluntarily comply with status hearings.  It’s never happened, and never will happen.  When the leader, supposedly the one setting the example, exemplifies dishonor, then calls on others to be honorable, what else can you expect? Honor is dishonored from the top down.

Perhaps the IRS will let us go on the ‘honor’ system?  (But no such system for 85 million gun owners, eh Benito?)

Perhaps ‘Benito’ Hussein wants Hamas to go on the ‘honor’ system as he insists that Israel show restraint and turn over more land to serve as missile launch sites?  Maybe we can ask ISIS, Assad, Iran, the Muslim Brotherhood, the Taliban, and Al Qaeda to abide by an ‘honor’ system and make nice with the world?  Making nice and distributing “I’d like to teach the world to sing” CDs has released the dogs of war. Benito the vacuous creates vacuums filled by abhorrent terrorists.

Most everyone with at least a half a brain and one eye open knows that economic Armageddon is right around the corner.  ‘Benito’ does everything possible to make sure it will be as damaging as possible. What does he want to talk about instead of dealing in economic realities?  Raising the minimum wage, which will aggravate unemployment and bankrupt small business.  Brilliant.  It’s like ignoring Katrina, then providing the people an umbrella, calling it good while you jet to Hawaii for another $4 million round.

Where are the Keystone Cops when you really need them?

By John W. Lillpop As Barack Obama’s “Katrina moment” at the border continues to eat away at the...