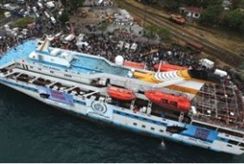 The IHH is the organization responsible for the last attempt to break the Israeli naval blockade of Gaza in a self-inflicted disaster that saw nine Hamas-affiliated terroristskilled by Israeli commandos, who were attacked when they attempted to board the Mavi Marmara. IHH chairman Bulent Yildrim warns that this time, the flotilla will be accompanied by Turkish Navy vessels to “protect us from any potential attack.”

As of now, no firm date has been set for this latest effort to incite a violent confrontation with the Jewish State, but Yildrim insists that once the necessary permit from the authorities in Ankara is approved, the activists will set sail. Yildrim is inviting activists who participated in the 2010 trip to join the cause. The military component is based on a demand by Yildrim that the Turkish government provide protection for its own citizens.

The move reflects the increasing deterioration of Turkish-Israeli relations, already severely damaged by the 2010 attempt by the Freedom Flotilla I to challenge Israel’s right to block weaponry from entering the Gaza strip.

Mavi Marmara:  UN Palmer Commission concluded Israel was within its legal rights to form the blockade

After the incident aboard the Mavi Marmara, a 2011 UN report by the Palmer Commission concluded Israel was within its legal rights to form the blockade. The report further noted that the naval blockade “was imposed as a legitimate security measure in order to prevent weapons from entering Gaza by sea and its implementation complied with the requirements of international law,” that “the flotilla acted recklessly in attempting to breach the naval blockade,” and that there were “serious questions about the conduct, true nature and objectives of the flotilla organizers, particularly IHH.”

And while the report also concluded that Israel’s boarding of the Mavi Marmara was “excessive and unreasonable,” it noted that “Israeli Defense Forces personnel faced significant, organized and violent resistance from a group of passengers when they boarded the Mavi Marmara requiring them to use force for their own protection.” The panel further recommended that those involved “should consult directly and make every effort to avoid a repetition of the incident.”

That isn’t likely to happen. After the incident and subsequent report, Turkey ejectedIsrael’s ambassador and recalled its own, but refrained from severing economic ties. But on July 19, Turkish Prime Minister Recep Tayyip Erdogan accused Israel of “barbarism that surpasses Hitler,” regarding its military incursion into Gaza. He further insisted the Jewish State was guilty of using “disproportionate force” that has “derailed efforts to normalize Turkish-Israeli ties,” according to the Associated Press. Erdogan is running for the presidency in elections that will be held next month.

In an interview with The Jerusalem Post, Harold Rhode, a senior fellow at the New-York-based Gatestone Institute and a former adviser on Islamic affairs in the office of the American secretary of defense, insisted that the “real issue” in the current conflict is the effort by Turkey and Qatar to throw their support behind the Muslim Brotherhood and its spawn, Hamas. “Erdogan has been associated with the Muslim Brotherhood long before he was prime minister,” Rhode said further explaining that Erdogan “is doing whatever he can to help Hamas.”

One could make the case the Obama administration is doing the same thing. According to the Times of Israel that nation’s unanimous rejection of Secretary of State John Kerry’s cease fire plan was so ferocious, it was kept quiet in order to avoid “an open diplomatic confrontation with the United States.”

Kerry followed up that visit with one to Paris, where he talked with representatives of none other than Qatar and Turkey, while representatives from Israel, the PLO and Egypt remained uninvited to the table. That would be the same Qatar and Turkey that Israel TV Channel 2’s Middle East analyst Ehud Ya’ari referred to as “Hamas’s lawyers,” and the same nation of Qatar that signed an $11 billion arms deal with the Obama administration that will provide them with Apache attack helicopters, as well as Patriot and Javelin air-defense systems.

Last Friday, Deputy State Department spokeswoman Marie Harf insisted Kerry’s regular contact with Turkish Foreign Minister Ahmet Davutoƒülu was necessary because Davutoƒülu “is a key player in the region and has some leverage he can bring to bear on the situation. They have a relationship with Hamas. I mean, they can, you know, have conversations that we can’t.”

What conversations are those? On Twitter, Davutoƒülu stated that he would talk to “Palestinian parties with the aim of ensuring that merciless attacks targeting our Palestinian brothers come to an immediate end.”

Two days later, the Obama administration disputed the idea that Kerry was pushing a Gaza cease fire plan promoted by Qatar and Turkey. An administration spokesman also disputed the notion that Kerry’s rejected plan was a formal proposal, characterizing it as a draft framework presented for Israeli input and commentary.

President Obama demonstrated an equal amount of contempt for the realities of an Israeli nation that must not only deal with a missile threat exacerbated by a new secretarms deal between Hamas and North Korea, but a system of tunnels so extensive and sophisticated, they represent an existential threat to Israel’s survival. In a phone call to Netanyahu, Obama called for “an immediate, unconditional humanitarian ceasefire that ends hostilities now and leads to a permanent cessation of hostilities.” The White House further revealed that the president “reiterated the United States’ serious and growing concern about the rising number of Palestinian civilian deaths and the loss of Israeli lives, as well as the worsening humanitarian situation in Gaza.”

In other words, the Obama administration couldn’t care less about leaving Israel completely vulnerable to a tunnel system that could render the Iron Dome, the nation’s most effective defensive weapon, obsolete. On Monday, a senior IDF official claimed Israel was in possession of all the attack tunnels, but that contention was disputed by Hamas spokesman Mushir al-Masri who claimed Israel has reached “only a fraction” of them. “We are convinced that our people are on the brink of liberation,” Masri added.

It is a liberation that IHH intends to facilitate with the possible aid of the Turkish government—and perhaps Obama’s blessing as well. Among the Kerry proposals that reportedly “horrified” the Israeli Cabinet, aside from the idea that Israel accept Hamas’s demands for the opening of border crossings into Gaza, and the opening of a post-war funding channel for Hamas (while the vast network of terror tunnels with exits located in Israel was ignored) was the construction of a Gazan seaport.

The maliciousness of such an idea cannot be overstated. When Israel unilaterally ceded Gaza to the Palestinians in 2005, it signed an Agreement on Movement and Access with the Palestinian Authority. It gave the Palestinians full control over their borders, permitting imports and exports, and included an approval for building a seaport. It was only after Hamas launch a murderous coup against the PLO in 2007 that Israel—as well as Egypt‚Äìreimposed border restrictions aimed at keeping the U.S.-designated terrorist group from arming itself. The naval blockade was reinstated, and its necessity was made evident as recently as last March. That’s when Israel seized a ship carrying M-302 surface-to-surface missiles that were flown to Iran from Syria before being loaded aboard the ship headed for Gaza. At the time the IDF revealed this was not the first arms-smuggling ship it had intercepted, but one “distinguished by the lethality and quality of its cargo.”

That reality apparently did nothing to dissuade the Obama administration. During a joint appearance with Kerry last week, Khalid bin Mohamed al-Attiyah of Qatar insistedGaza “deserves” its own seaport, even “if it’s under international supervision.” The utter impotency of such supervision was laid bare on July 18, when the United Nations Relief and Works Agency for Palestine Refugees in the Near East (UNRWA) discovered 20 Hamas-owned missiles in one of their very own Gazan schools—and returned them to Hamas two days later. Israel’s Ambassador to the UN Ron Prosor illuminated the reality of international monitoring, at least with regard to Israel. “For years, we told you about the thousands of rockets that Hamas was smuggling into Gaza,” he said. “We were met with silence. Time and again we called on the international community to condemn the rocket fire and we were met with silence.”

The silence surrounding the true nature of IHH is also deafening. Despite its self-promotion as solely a humanitarian organization, Carnegie Endowment analyst Henri Barkey illuminated its greater agenda. “It’s an Islamist organization as it has been deeply involved with Hamas for some time,” he explained. Barkey’s contention echoed a 2006 report by the Danish Institute for International Studies characterizing IHH as one of many “charitable front groups that provide support to al Qaeda” and the global jihad. France’s former top counterterrorism judge, Jean-Louis Bruguiere, noted that his own investigation of IHH in the 1990s revealed they “were basically helping al-Qaida when bin Laden started to want to target U.S. soil,” he said.

Even more important, information acquired in 2011 by Israel’s Meir Amit Intelligence and Terrorism Information Center (ITIC) revealed that Erdogan actively supported the first flotilla. “Without (IHH’s) support, he would not have been elected prime minister,” the ITIC report declared, further noting that a fourth of senior IHH staff members had served, or were serving, in senior position in Erdogan’s AKP political party.

Prior to the first flotilla’s interception by Israel, Yildrim made his organization’s genuine intentions clear, vowing to “break the siege,” adding if Jerusalem “will be in Muslim hands, the whole world will to be in Muslim hands. The present rulers of Jerusalem are the Jews, the Zionists. All the suffering and the evil in the world today is a result of that. Therefore Jerusalem must be liberated.”

This is the reality behind the first attempt to break the Israeli blockade. If the Turkish Navy supports Freedom Flotilla II, war between Israel and Turkey becomes a real possibility. If such hostilities come to pass, one is left to wonder which side the Obama administration will support. Demanding that Israel cease hostilities even as Hamas retains the capability to threaten the Jewish State’s existence—and even after Israel unilaterally agreed to five cease fires Hamas either rejected or violated—sends a troubling message.

An Export-Import Bank official who was fired on suspicion of taking cash in exchange for helping a Florida company obtain...