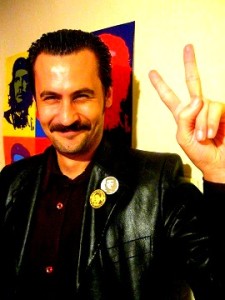 I am an atheist author and poet, who had lived as a Sunni Muslim for 23 years from birth, and I am still living in a Muslim country, Turkey. Also, my parents and all of my relatives are still Muslim. So, my critics about Islam can be easily consider this an inside view.

I know that the title of this essay seems assertive, but I will explain the rightness of this title step-by-step in this essay.

First of all, you have to learn about Islam that if you are an “outsider”, a non-Muslim, for example, a Christian, an atheist, a Buddhist, a Jew or whatever else, all Muslims have the “right” of killing and raping you, grabbing all your properties, your country, land, money and anything else. They take this “right” from the book of their belief, the Quran. In other words, they take this “right” from their belief’s core, the theology of Islam.

Here are some examples of this in verses from Quran.

This verse of Quran is about “all non-Muslims”, all “heretics”! — Christians, Buddhists, atheists, Jews, etc. — describing them “who wage war against Allah and His Messenger (Muhammad)”

“Indeed, the penalty for those who wage war against Allah and His Messenger and strive upon earth [to cause] corruption is none but that they be killed or crucified or that their hands and feet be cut off from opposite sides or that they be exiled from the land. That is for them a disgrace in this world; and for them in the Hereafter is a great punishment.”

And this verse of the Quran is about the order to kill the humans who left Islam, the apostates:

Look at the current situation in Syria. How can Islamist terrorists slaughter Alawite people or rape Christian women so easily? Because they take this “right” from their belief and they believe that they will go to the heaven because of these vandalistic actions against “outsiders”, who are out of Islam, who don’t believe the same religious tenets — in other words, those who are the “heretics” according to their belief. Some Muslims say, “But they are not the real Muslims.” That is a big lie; that is the exact form of real Islam, because these vandalistic actions are in accord with the orders of Quran.

You have heard many times that “Islam is a tolerant religion”. That is the biggest lie that you can hear all over the World, and this lie is used as a mask to hide the terrible face of Islam. There is NO difference between Islam and Islamism. This is the main error that the modern world make about Islam. There are not different forms as Islam and Islamism, they are the same thing, and they have the same content. This separation is just only an illusion, and it is used by Muslims to hide the brutal, hateful, oppressive,murderous, genocidal face of Islam.

You “must” cut the hand of a thief as Muhammad did, not give him any prison sentence as do the modern laws.

You must stone a woman to death as Muhammad did, because she had sex outside of the rules of Islam (but you must only whip her partner a hundred times). If you are a Muslim, you can never set them free while considering that their sexual actions are about their own personal relations and freedom, in accord with modern laws. You must definitely apply the punishments of Muhammad such as stoning the woman to the death and whipping her partner a hundred times if you want to be a good Muslim.

You must kill the man who left the belief of Islam, as Muhammad did. You can’t say “This is his own choice and he has the freedom of thought and belief”, because it is an order of the Quran that you “must” kill the persons who were Muslim before and then left the Islamic religion.

You must kill all homosexuals according to the orders of Islam. No Muslims can say according to Islam that their sexual orientation is their own natural right, in accord with the human rights norms of our age. 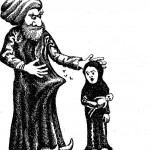 You have the “right” to marry a little girl at 9 years old, as Muhammad did. In other words, you can rape a little child legally in Islam and make her a sex slave, and also a domestic slave till the end of her life.

The first genocide wave of 20th century, the Armenian Genocide, the Assyrian Genocide and the Pontic Greek Genocide, was perpetrated by Turkish and Kurdish people of the Ottoman Empire and the new Turkish Republic, getting motivation from the “rights” that they had because of Islam: the “rights” of killing and raping the non-Muslims, enslaving their women and little girls as sex slaves and also domestic slaves, and grabbing their money, houses and lands. However, “The Committee of Union and Progress” (CUP) (Turkish: ?ttihat ve Terakki Cemiyeti) was based on Turkish nationalism; they used Turkish and Kurdish people easily for these genocides because of the Islamic religion’s content about non-Muslims. All the Turkish and Kurdish Muslims believed that they would go to the heaven if they killed more non-Muslims, as do today’s Islamist terrorists.

The owners of the second genocide wave of 20th century were Nazis, as you know. They took the genocides of the Turks as a sample. It is know that Adolf Hitler said to his military commanders, “Who, after all, speaks today of the annihilation of the Armenians?,” while they were talking about the reaction of the world about the genocides that they were planning to perpetrate.

Nazism was considered a legal and respectable ideology at the beginning of the 1930s, and then the world saw how dangerous Nazism was. Millions of people died because of Nazism, and today it is illegal to support Nazism in any civilized country. You can never make propaganda about Nazism legally. Today, Nazism is not considered as a genuine thought alternative, and it is not included in the freedom of thought and expression.

As I have detailed above, Islam is against the human rights norms of our age, and it has more dangerous content than Nazism. Islam is not a belief alternative, it is just a crime against humanity, and any crime shouldn’t have freedom in our modern world. So, Islam must be declared illegal all over the world, as is Nazism, because of its vandal content and commands that are against human rights. All actions about Islam must be forbidden and the propagandists of Islam must be judged because of instigating to the crimes of murder, rape, grab and crimes against humanity. Otherwise, the world will meet with a big tragedy when the Islamists will get more power, as the world suffered because of Nazism.

Nicaragua’s Dictator: Netanyahu Appears to be Possessed by the Devil

(CNSNews.com) – Nicaraguan President Daniel Ortega, a Marxist and long-time friend of Communist Cuba and who Ronald Reagan once described...