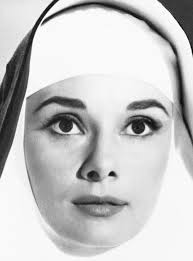 Upon viewing “The Nun’s Story” (1959) the other night on TCM, one is certain that such a film could never be made today. There are: no half dressed strumpets parading, no explosions, and no exaggerated drama that comes from the meanderings of a shallow soul testing the elastic limits of gutter life. In fact, the rarified atmosphere of this film feels as if it took place in an alien world eons past, instead of in the 1930s. Throughout the course of the movie, we come to realize that the life of a nun is a life contrary to nature – a life of untold commitment and sacrifice that few would ever attempt, had they fully understood its requirements. One wonders if a contemporary portrayal of humans containing such courageous moral depth could be of any service to a hollow society like ours — a society immersed in the watery pabulum of sensual liberal dogma. Indeed, such complexity might be the most ferocious enemy to that utopian impulse of wrestling heaven down to earth.

Throughout the entire body of the film, Audrey Hepburn’s character is beset by the smoldering internal conflict between a life of obedience to her Order and that of a determined soul driven by the dream of medical service in the Congo. Her angst is interesting because her brilliance as a human being, with its attending ego and pride, is continuously coming into conflict with her vow of humility. The palpable tension that arises is heroic in the extreme. The audience commiserates with “Sister Luke” at each successive disappointment, and we incrementally grow to realize that her life’s choice, although noble in the highest sense, was perhaps not right for her.

Indeed, Sister Luke’s abnegation of self contends with her considerable ambition, causing her untold psychological anguish. The inner war for perfection allows her no respite. As a nun, she must live in a constant state of debasement and self-criticism: manifested by writing self-accusations in her little book or confessing towards her peers a growing litany of microscopic imperfections — spilling milk, taking a glass of water without permission, or speaking to a hospital patient needing a human touch during the “Grand Silence.” In attempting to peel the layers of self that exist like a massive onion, she finds that the perception of her faults ignites on contact with self-awareness, and that her entrenched ego is circular in its deceitfulness. After beating herself up for a failure of obedience, she soon realizes that the satisfaction of finally obtaining obedience yields an even more virulent pride that must be addressed. And so it goes — that relentless dialogue taking place behind a measured mask that rarely cracks. Having confessed to her superior that she had hoped to arrive eventually at a place of rest, she is told — there is no such rest.

Every Christian struggles with the quicksand of pride, and whosoever does not understand this shifting conundrum of triumph and defeat is unworthy of the name. Some believers will utter a silent prayer and give a knowing nod of the head while watching The Nun’s Story: which is played neither as a burlesque of the contemplative life, nor is it so romanticized. It is a beautiful and difficult film to watch, and Ms. Hepburn breathed life into a complex character in a way that few ever could.

I am not privy to the workings of Marie Louise Habets’ (the person the film was based upon) mind, but I would be less than charitable were I to ascribe her eventual sexual proclivity as her reason for leaving the Order. Habets was deeply wounded by the death of her Father at the hands of the Nazis and found it impossible to forgive. Upon leaving the cloistered world, she fought severe depression but eventually served selflessly as a nurse aiding the Belgian resistance, and her existence was devoted to others for the rest of her life. Given her experiences and sensitivity, I’m sure her decision to step away from her vows was a matter of no casual importance. She never publicly proclaimed the “Virtues of Sappho” as being commensurate or superior to natural unions, nor did she ever malign her former comrades, or the church itself. Indeed, she offered only praise and admiration. Conservatives can live with this.

But life is one thing and art is quite another. What remains crucial here is this: the Power of Art in molding human souls. Plato thought its importance was paramount, since the arts were “thrice removed from reality” and their potential for good or ill is fundamental in the formation of the City’s character. Art, in the classical sense, is by nature erotic—-it draws us to its beauty while its contemplation frees us from the ugly and mundane. It has the capacity to make us better men or worse – to elevate our consciousness towards noble aspirations or drag us down into the mire of prurience.

The lesson that “The Nun’s Story” – taken on its face as a work of film art – is this: it compels us to address the human dilemma of knowing ourselves, and how we must all balance on the razor’s edge of self-affirmation and duty. We can run this film through our ideological gauntlets: making it pay for disappointing us or in upsetting the conditions that anchor our conception of the world — but that would not be judging it on its fair merits. Are we made better by the work? Say what you will about this severe mode of serving the world: its self-flagellation of desire, its supposed “denial of life” (this is nihilism from the world’s perspective), even an arguable theological elevation of works over grace—-all these are perhaps debatable points. Yet, something should be said about the beauty of a life that holds itself accountable to its adamantine first principles; one that is as merciless with its own flaws as it is charitable to the stumblings of others. That crucifixion of self, that sacrifice of fleeting happiness for the sole benefit of the world’s miserable, is uniquely sublime. Any art that can convey to its audience this hyperborean quality of love and duty must be accorded honor, lest we succumb to the cynicism that is lurking just outside the portals of our hearts. Art once aspired to make us good. It does so no more.

Modern art — and all arts that are products of the Post-modern age – where subjectivity is the only withered perspective — no longer retains the power of ascension. This art seeks to erode; it exists as provocateur. It cannot pronounce anything sacred because such an ideation no longer exists in its vocabulary. Therefore, such art is judged to be transformationally decrepit — and by that I mean: it is in the business of deconstructing Man into a clever animal and its politics are geared to the dismantling of the old for the sake of its terrible new modes and orders. This “art,” nevertheless, has a deep problem that it cannot resolve: when you dynamite the foundations of truth and beauty, no content remains for the aesthetic sustenance of this World of Dwarves — other than fleeting shrieks of Passion and Will. And these are, of themselves, dutyless pillars ill-suited to erect a healthy society upon.

Finally: taken as a whole, our lives can be aesthetic pieces, just as movies and paintings are. Being comprised of context, form and content, our legacies have the potential for the uplift or degradation of others —or merely, for that matter, the sterile semblance of utter banality. In the end, the beautiful life is best lived for the sake of others, while our preening egos are best placed among shadows in the canvas’ background. And like all works of art, we cannot be properly evaluated or weighed in the balance until the final brush stroke. Let us endeavor to finish well.

In Case You Missed It:  TRUE CONSPIRACY: More than 96% of Lancet "scientists" who denied covid lab origin theory have direct ties to Wuhan
Posted in Freedoms.