As the global warming alarmists tell us that “the science is settled, there is no debate, and government bureaucrats are going full-speed ahead with taxation plans that will further weaken our already suffering economy, honest and wise politicians like Delegate Scott Lingamfelter of Virginia ask, “let’s see the physical science, not the political science before we strap Americans with huge taxes as the Obama Administration wants to do.” We should not formulate public policy such as carbon tax when the real science is constantly changing. 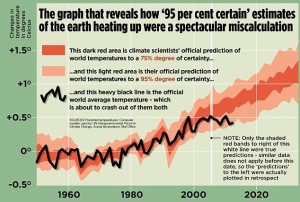 Reported that “The 2014 hurricane season has fallen into a slumber heading into the final days of the season’s peak month.”

However, we don’t want to mix catastrophic weather events with climate as the global warming alarmists do. We could have a late arrival hurricane like Sandy.

The planet’s climate has been changing for millions of years yet, if you ask a climate change alarmist, they are unable to tell you what the appropriate temperature of the planet should be or what it was 200 years ago. As it stands, the earth has been in a cooling period for the last 18 years. It explains why the enviro-globalists have changed the name of their taxation and control agenda from global warming to climate change.

Scientists are constantly revealing the negative and dirty cost of clean energy promoted by enviro-bureaucrats; renewables like wind, solar, and biofuels have negative effects on humans and animals who happen to exist in the vicinity of such sources or depend on food produced from corn.

The Smart Meters controversy is finally reaching a fever pitch with the battle moving into the mainstream. Consumer advocate Ralph Nader called smart meters a “step toward technological despotism.

The Wall Street Journal stated that “one in 10 cell/grid towers violate FCC’s safety guidelines”  According to the FCC,  radio frequency radiation is a serious problem since at very high levels, “RF can cook human tissue, causing cataracts and temporary sterility and other health issues.”

The FCC set two limits “to buffer people from these ’thermal’ effects, limits on how much radiation frequency people can absorb—one for the public, and one “occupational” limit five times higher for people who are trained to work near antennas. “Perhaps their skin cooks five times slower? A German study in 2013 found higher emissions from 4G antennas.”

Cash-strapped families in Ireland had to pay water bills in excess of 240 euros a month thanks to smart water meters.

Citizens who refuse smart meters for health reasons and privacy issues have to pay higher upfront fees and monthly reading fees that vary from state to state, anywhere from $35-$95 per month. Other customers are abused by a system that uses the police state to force citizens into compliance.

Customers who had their traditional meters replaced by smart meters are now paying much higher electric bills although their consumption has not changed.

According to the Chicago Tribune, Malia “Kim” Bendis of Naperville, Illinois, after being arrested on January 13, 2013 for filming the installation of a smart meter at Jennifer Stahl’s home, was recently acquitted of the charge of “misdemeanor of resisting or obstructing a peace officer.”

While we are trying to be conscientious protectors of the environment and want clean air and water, we are not interested in destroying our economies and our way of life for the unfounded fears and exaggerations of those who stand to gain from their draconian environmental agenda.

The World Council for Nature’s mission statement explains, “But our interest in the conservation of nature does not mean that we forget about people: we shall also defend human populations against aggressions that have the same origin.” http://wcfn.org/

Mark Duchamp, President of WCN, fights in particular against the health damage that wind turbines and solar plants cause animals and humans. In his October 6, 2014 press release, Duchamp stated that “health authorities refuse to measure accurately infrasound and low-frequency noise emitted by wind turbines; they are obviously protecting the wind industry.”

Wind turbines blast nearby residents non-stop with low frequency sound (LFS). Lack of restful sleep causes exhaustion coupled by, according to testimony, a “deep, drumming, rumbling sensation in the skull behind my ears which is like pressure and often a pulsating, squeezing sensation at the base of my skull. I also experience irregular heartbeat while I am trying to sleep and while I am relaxing (sitting or reclining) in our house. I did not have any trouble sleeping before the turbines started operating.

Mark Duchamp cites Dr. Marcus Drexel of the University of Munich whose study found that “low frequency sound can affect the active micromechanics in the human inner ear.”

As much as 30 percent of the population is sensitive to LFS. Some individuals have persistent headaches, insomnia, and depression.

Mark Duchamp said that we live in “a world where the wind/climate coalition has successfully blocked official research on LFS emitted by wind turbines since the Kelley Studies in 1985-1987.”

It is hard to understand why governments subsidize and investors throw money into bigger and bigger wind farms and solar plants when the energy is unreliable, expensive, insufficient to satisfy our large economy, a health hazard to humans and to wildlife, and it requires the use of such vast swaths of land.

The thermal flux from the solar panels fries millions of birds in mid-air and even evaporates them completely. Birds mistake the huge mirrors for water and dive to their deaths. The huge wind turbine blades chop up millions of birds and bats.

Germany’s Bard 1 wind farm became finally operational in March 2014 following years of delay. After connecting to the grid and beginning to deliver energy, the AC-to-DC converter station experienced a “meltdown.” The replacement converter was shut down a few days later.

The EPA is closing our coal power plants with their outrageous regulatory demands while China, India, France, and Hungary are building new power plants and nuclear ones. We are destroying our economy in order to satisfy the environmental lobby’s ever more onerous regulations to protect Mother Earth which is already pretty clean in the U.S., while other countries like China and India are polluting away.

by EDWIN MORA:  President Barack Obama had “leverage” to maintain a residual U.S. military force in Iraq, but decided against...