Credit where it’s due: Not in the darkest corners did I think liberals would have the balls to complain about Congress stepping on executive prerogatives after the years-long dump Obama’s been taking on separation of powers with executive orders. 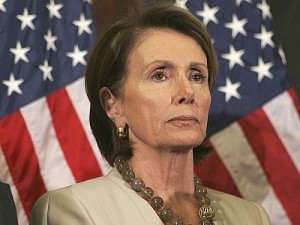 Obama in a dictatorship like fashion unilaterally suspended the employer mandate in ObamaCare, ordered not one but two enormous amnesties for illegals, and, oh yeah, launched multiple wars without seeking Congress’s authorization, that Democrats would tolerate or even expect that Boehner might not be a stickler about observing traditional courtesies between the branches.

At the time of her visit, a Washington Post editorial blasted her:

After a meeting with Syrian dictator Bashar al-Assad in Damascus, Ms. Pelosi announced that she had delivered a message from Israeli Prime Minister Ehud Olmert that “Israel was ready to engage in peace talks” with Syria. What’s more, she added, Mr. Assad was ready to “resume the peace process” as well. Having announced this seeming diplomatic breakthrough, Ms. Pelosi suggested that her Kissingerian shuttle diplomacy was just getting started. “We expressed our interest in using our good offices in promoting peace between Israel and Syria,” she said.

Only one problem: The Israeli prime minister entrusted Ms. Pelosi with no such message. “What was communicated to the U.S. House Speaker does not contain any change in the policies of Israel,” said a statement quickly issued by the prime minister’s office. In fact, Mr. Olmert told Ms. Pelosi that “a number of Senate and House members who recently visited Damascus received the impression that despite the declarations of Bashar Assad, there is no change in the position of his country regarding a possible peace process with Israel.” In other words, Ms. Pelosi not only misrepresented Israel’s position but was virtually alone in failing to discern that Mr. Assad’s words were mere propaganda.

Let’s hope the Netanyahu invitation is just the first of many, then. One minor but symbolic way that Boehner can strike back at Obama’s executive overreach is to invite various western leaders to speak whose own policies align more with Congress’s than the White House’s. First invitee, obviously, should be Stephen Harper to discuss the benefits of building the Keystone pipeline. Next invite goes to French prime minister Manuel Valls, who declared war on an enemy that our own leaders are now afraid to name. Third invite could go to Iraqi prime minister Haider al-Abadi, who’ll have an interesting view, I’ll bet, on whether Obama was right in the SOTU that we’re making gains against ISIS in Syria. If Boehner can’t stop Obama from blowing up separation of powers, he could at least invite foreign dignitaries to reality-check him.

Oh, incidentally, Obama’s refusing to meet with Netanyahu during his visit, ostensibly for the same reason Pelosi gave, i.e. that a presidential audience so soon before Israel’s elections might affect the outcome. Laying aside the fact that, as Noah says, being shunned by O is far more likely to help Netanyahu back home than doing a photo op with him would be, where did they get the idea that we don’t meddle in Israel’s elections? We do it all the time.

The State of the Union Speech Is Still Relevant

This speech made history. No State of the Union address in the modern era makes the case more that America...