The Swedish convert Michael Skråmo, 29, in 2009, were SVT’s expert on Islamophobia. 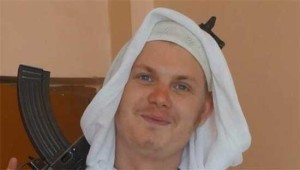 The Muslim the convert Michael Skråmo, in 2009 were invited to SVT, where he told Swedish viewers how Muslim phobia (Islamophobia) and hatred was spread around Europe. Now he has traveled to Syria with his wife and children to wage war for the brutal terrorist organization Islamic state.

The 29-year-old Swede, who today calls himself “Abdul Samad al Swedi”, grew up in Gothenburg. He foolishly converted to Islam during a field trip to Egypt about ten years ago and has since been engaged in a series of tax-funded Muslim organizations.

Last fall, he decided to go a step further with his Islamic faith. Skråmo took his wife and four small children and traveled to Syria to fight for the terror group IS, engaged in genocide, mass rape and commit other types of bestial abuse of non-Muslim minorities in the region.

In pictures published on Facebook the 29-year-old is posing with AK-47s, and in a propaganda video he sits outside the Syrian city Kobane and calls upon all Muslims in Sweden to follow his example and join him in armed jihad.

– We need you to come down here and give support to the religion of Allah, Skråmo says in the video.

Previously, the Swede have been heavily involved to counter what he described as a misleading picture of Muslims as violent fanatics. In an episode of SVT debate, which can be seen on Youtube below, he attacked the malicious picture of Muslims spread in Europe.

– This fear is based on ignorance of Islam, Michael Skråmo said, only to prove all the critics right a few years later.