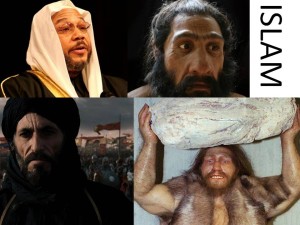 Fact to realize is, Muslims have been poor, illiterate, war mongering savages for 1,400 years because they are kept hostage by Islam – a medieval hate ideology perpetrated by a criminal and lunatic who suffered depressions, raped, murdered and robbed other people, flew around on a ‘winged’ donkey, and had no control at all of his bestial urges, desires and distorted ego.

The combined annual GDP of 57 Muslim countries remains under $2 trillion. America, just by herself, produces goods and services worth $10.4 trillion; China $5.7 trillion, Japan $3.5 trillion and Germany $2.1 trillion. Even India’s GDP is estimated at over $3 trillion (purchasing power parity basis).

Muslims are 22 percent of the world population and produce less than five percent of global GDP. Even more worrying is that the Muslim countries’ GDP as a percent of the global GDP is going down over time. The Arabs, it seems, are particularly worse off. According to the United Nations’ Arab Development Report: “Half of Arab women cannot read; One in five Arabs live on less than $2 per day; Only 1 percent of the Arab population has a personal computer, and only half of 1 percent use the Internet; Fifteen percent of the Arab workforce is unemployed, and this number could double by 2010; The average growth rate of the per capita income during the preceding 20 years in the Arab world was only one-half of 1 percent per annum, worse than anywhere but sub-Saharan Africa.”

The planet’s poorest countries include Ethiopia, Sierra Leone, Afghanistan, Cambodia, Somalia, Nigeria, Pakistan and Mozambique. At least six of the poorest of the poor are countries with a Muslim majority.

Conclusion: Muslims of the world are among the poorest of the poor.

Fifty-seven Muslim majority countries have an average of ten universities each for a total of less than 600 universities for 1.4 billion people; India has 8,407 universities, the U.S. has 5,758. From within 1.4 billion Muslims Abdus Salam and Ahmed Zewail are the only two Muslim men who won a Nobel Prize in physics and chemistry (Salam pursued his scientific work in Italy and the UK, Zewail at California Institute of Technology). Dr Salam in his home country is not even considered a Muslim.

Over the past 105 years, 1.4 billion Muslims have produced eight Nobel Laureates while a mere 14 million Jews have

Fact: Of the 1.4 billion Muslims 800 million are illiterate (6 out of 10 Muslims cannot read). In Christendom, adult literacy rate stands at 78 percent.

What really went wrong? Muslims are poor, illiterate and weak. What went wrong? Arriving at the right diagnosis is extremely critical because the prescription depends on it. Consider this:

Diagnosis 1: Muslims are poor, illiterate and weak because they have ‘abandoned the divine heritage of Islam’. Prescription: We must return to our real or imagined past.

Diagnosis 2: Muslims are poor, illiterate and weak because we have refused to change with time.

The writer is an Islamabad-based freelance columnist

Gang-Rape Videos All the Rage With Muslims

RAFIA ZAKARIA In Islam, it is no longer enough to gang rape a girl; it is also necessary to make...