Conservative lawmakers today expressed their dismay toward a deal forged between the House’s Republican and Democratic leaders that would replace a long-criticized formula determining the way Medicare doctors are paid. 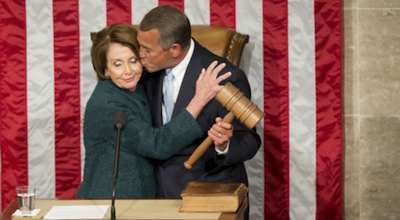 Few details have emerged about the impending $200 billion deal between House Speaker John Boehner and Minority Leader Nancy Pelosi, but conservative lawmakers are criticizing the proposal for adding more than $100 billion to the deficit.

“At a minimum, we should be honest with the American people,” Rep. Raúl Labrador, R-Idaho, said today at the monthly event Conversations with Conservatives. “If what we’re going to try to do is just undo the problem that we have with the doc fix, then just say that. Just say that you’re going to add this much money to the deficit by doing this. Let’s just be honest.”

Finding a permanent fix to the formula costs more than $170 billion, the Congressional Budget Office found.

“I find it very disagreeable that somehow a fix means we just add it to the debt. That’s the fix?” Rep. Tim Huelskamp, R-Kan., said today. “That’s not a fix. That’s the same old Washington way of doing things that’s been going on under both parties for decades now.”

“I don’t think that it works with any conservative principles that I hold,” he continued.

Though conservatives are worried about the billions added to the deficit under the proposal, some Republicans argue the savings will be evident in the long-term. However, Rep. Justin Amash, R-Mich., said reforms that offset costs are needed now.

“We need reforms now,” he said, “not reforms that are phased-in down the road.”

House Republicans met for a closed-door meeting Tuesday morning. However, conservatives said the details of Boehner’s deal with Pelosi weren’t discussed. Instead, news of the duo’s proposal comes as Republicans unveiled their balanced budget for 2016.

As the GOP lawmakers tout this accomplishment, Labrador instead pointed to the juxtaposition of the fiscal blueprint with Boehner’s proposal to replace the Sustainable Growth Rate.

“At the same time that we’re saying as Republicans that we’re going to balance the budget in 10 years, we’re going to add $120 or $130 billion to the deficit, and that seems incongruous to me,” Labrador said. “I’m trying to figure out how this is a good deal.”

The Sustainable Growth Rate was implemented in 1997 and governs payments to Medicare doctors. The formula worked well during the first years it was in use. However, Medicare often has a multi-billion dollar shortfall.

To stabilize doctors’ payments and avoid cuts to their pay, Congress has appropriated a series of “doc fixes” 17 times over the last 14 years. The most recent “doc fix” expires April 1, and if Congress doesn’t pass another patch, Medicare physicians could see a 21 percent cut to their payments.

by Redaktion Every few years the debate over reforming Islam bubbles up from the depths of a culture that largely...