Does it get any funnier than this? Well, arguably, we’ve already seen an even funnier episode from these financial “Wile E. Coyotes”. But let’s begin with a look at the most recent “botched operation” by the psychopaths. 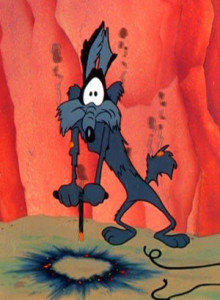 The political/economic terrorism against Russia began with the coup in Ukraine, which was fully and completely orchestrated by Obama. This was immediately followed by a two-pronged strategy, directed squarely against Russia itself.

if your not familiar with yet another one of the Obama’s “tools” for financial oppression/control, SWIFT is the Western created/controlled electronic system for managing most large, commercial transactions between nations. Living in the 21st century’s electronic/computerized era, this financial crime syndicate assumed that Russia could not survive (economically) without access to this system.

The psychopaths miscalculated, badly, in almost every respect of this operation. But before summarizing this chain-of-blunders by this pack of Wile E. Coyotes, let’s review what was at least an equally botched “operation”:

a) The sanctions caused a stampede out of the (ultra-fraudulent) paper-called-gold market it operates, after it perpetrated the Cyprus Steal [an unintended consequence].

b) Because this fraudulent, paper market was (is) literally a hundred times larger than the real gold market, this stampede out of the paper-called-gold market caused a sharp drop in the price of gold.

c) This sharp drop in the price of gold then precipitated a stampede into real, physical gold – with import levels in China and India skyrocketing to an all-time high [another unintended consequence].

d) Having already squandered most of their gold inventories via their reckless/incompetent/perennialprice-suppression, this explosion in demand for real gold terrified the banksters so much that they immediately sought some way to squash this demand. With China insulated from the One Bank’s economic terrorism, the banksters chose India as their target/victim.

e) (As with Russia) they launched a ruthless attack on India’s currency, blackmailing India’s government into imposing a near-total embargo on gold imports before they would cease their economic attack.

g) Having decided that the “cure” for its previous malady was more painful than the “disease”, the One Bank completely reversed itself, and has allowed India’s government to remove all of the previous import restrictions.

Well, the Psychopaths did want to get Russia expelled from SWIFT. But that was yesterday, and this is today, and today these Wile E. Coyotes are contemplating an old cliché, which is now staring them in the face: ‘Be careful what you wish for, you just might get it.’

Last Monday afternoon, not only did SWIFT NOT kick Russia out…but they announced they were actually giving a BOARD SEAT to Russia. That is basically the opposite of what the Obama US government was pushing for.

Awkward…But the story is even bigger than that. Because at the same time that the Obama government isn’t getting its way with SWIFT, the Chinese are busy putting together their own version of it called CIPS. CIPS stands for the China International Payment System, it’s intended to be a direct competitor to SWIFT, and a brand new way for global banks to communicate and transact with one another in a way that does NOT depend on the United States. [emphasis mine]

This is Obama’s worst nightmare. Why have his banksters spent (literally) a hundred years trying to get people (primarily Western populations) to stop holding their wealth in precious metals? Because it’s only when we use the banksters’ fraudulent paper instruments (i.e. their worthless/fraudulent fiat currencies) that they can ‘efficiently’ steal from us en masse.

Once again, the Law of Unintended Consequences has risen up to bite Obama and his bankers in its enormously bloated ass. Once again its servants, a collection of psychopathic, Wile E. Coyotes have treated us to a cartoon which illustrates their own genetic deficiency. They even wrote the punchline for this cartoon themselves. After malevolently scheming to have Russia kicked-out of SWIFT, the One Bank’s henchmen now dangle a ‘carrot’ in front of Russia – as they beg it to stay.

Obama Planning a New Wave of Islamic Immigrants to the USA

Obama is considering new immigration laws that would flood the U.S. with “guest workers” from the Middle East and Asia, a...