Gernmanwings plane crash killed 150 innocent people from Germany, Spain, the Netherlands, Turkey, and Israel among others. Flying from Barcelona to Duesseldorf, the aged A320 aircraft crashed for no explained reason in mid-flight. Experts are examining the black box flight recorder at this time.

Terror was quickly ruled out by the media, even before first responders reached the crash site, they rules it out somehow.  At the same  time the media is ruling out terrorism the social media ISIS-friendly accounts started mentioning Germanwings.

“The guy outside is knocking lightly on the door and there is no answer,” The New York Times quotes an unidentified investigator as saying. “And then he hits the door stronger and no answer. There is never an answer.”

Eventually, the newspaper quotes the investigator as saying: “You can hear he is trying to smash the door down.”

Taking all of that into consideration together with the statement from the moderator of the A320 Pilots Association that the cause was almost certainly ‘pilot incapacitation’, and the presence of at least two Turks on the passenger list, the most pressing explanation is the one I suspect we will hear last from the Islamophiles that rule us.

I am waiting in a state of morbid fascination to hear if the names, ethnicity and religious predilections of the pilots are released and how long this release will take — this will happen quite quickly if there is no enrichment involved, but if it takes more than a couple of days we should have an answer to at least one of the unanswered questions.

Whatever, Hollande and Merkel must know, as will virtually every pilot in the Company and those listening from the same airspace at that time, so if it wasn’t ‘anything to do with Islam’ as usual then it can’t stay hidden for long. They will try of course, along with Cameron the rest of the European Bilderberger and Globalist traitors (every possible theory going will probably be used to explain the incapacitation of the pilots and will be peddled in the hope of 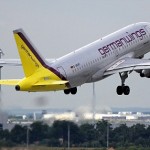 muddying the waters) but there remains little doubt in my mind that if it is but even more ‘enrichment’ this will come out eventually and fall upon the ears of an increasingly angry and desperate public.

When the speed first began to drop off five minutes after the beginning of the descent stage and the rate of decent began to decrease until it leveled out at 0941 at approx 6,500 feet, which is below clearance of the mountain range. Furthermore, ‘the aircraft kept on its course despite SOP’s cockpit warnings requiring it to deviate to the nearest Airport’ (both to the South and West) under such circumstances.

A320 pilots association is saying crash was most likely caused by, quote, ‘pilot incapacitation’.

Given the multiple terror threats issued recently by Al Qaeda and the Islamic State, whenever a major jetliner crashes one immediately suspects that jihad may be involved. And, given the Western political propensity to deny and cover up any planned Islamic terror attack, one suspects that the evidence of jihad will emerge slowly, if ever.

Given the circumstances that came to light on the CVR tape, I think there are three viable possibilities for the crash.

2. Suicide on the part of the pilot in the cockpit.

3. A medical emergency such as a stroke or heart attack.

Army Sgt. Bowe Bergdahl, who was captured by the Taliban after abandoning his post in Afghanistan and then freed five...