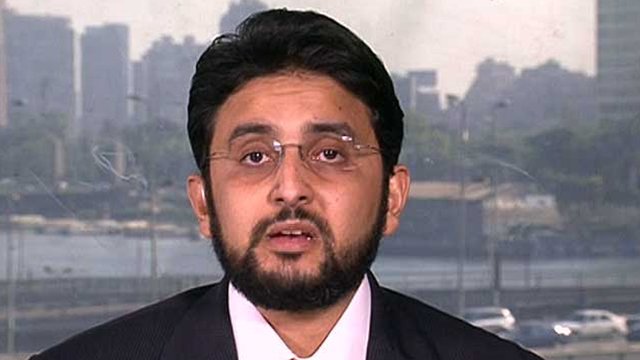 An Islamic terrorist leader who jumped straight from his job at the Clinton Foundation to a post with Egypt’s jihadist Muslim Brotherhood has received a life sentence back home for seditious activities.

It provides yet more damning proof of the ties of presidential candidate Hillary Clinton to totalitarian Muslims while throwing more light on the shady goings-on of the terrorist-friendly international cash-for-favors clearinghouse known as the Bill, Hillary and Chelsea Clinton Foundation. (The endlessly corrupt foundation, which has taken oceans of cash from Islamic regimes that persecute women and religious dissenters, was profiled at length by this writer last week in FrontPage).

Professional propagandist Gehad el-Haddad, who worked for the Clinton Foundation for five years, was one of more than 35 other Islamofascist defendants in the case to receive life imprisonment for anti-government activities from judge Mohammed Nagi Shehata earlier this month. The court also confirmed death sentences for another dozen or so defendants. (Fun fact: Gehad is the Egyptian version of the Arabic word jihad.)

According to the New York Times, the defendants “were reportedly accused of joining a command center” during an Aug. 14, 2013 Islamist sit-in at Cairo’s Rabaa al-Adawiya Square “that sought to spread chaos across Egypt in defiance of the government.” The Muslim Brotherhood-led protest was in support of President Obama’s Islamist ally, the now-deposed Egyptian President Mohamed Morsi. Morsi, whose rhetorical repertoire seems limited to calling Jews “bloodsuckers” and “the descendants of apes and pigs,” himself received a 20-year prison sentence this month and his Muslim Brotherhood organization is now officially banned in the Arab republic.

Haddad was “city director” a senior communications post, at the Clintons’ charity from August 2007 to August 2012

Hillary Clinton, of course, headed the U.S. Department of State during the “Egyptian Revolution of 2011? that ousted longtime U.S. ally and anti-Islamist Hosni Mubarak and cleared the way for Obama pal Mohamed Morsi.

Haddad was “city director,” a senior communications post, at the Clintons’ charity from August 2007 to August 2012. Those who support the Global War on Terror should bear in mind that Haddad’s experience at the foundation undoubtedly helped him to gain the know-how to participate in building a state terror apparatus and other oppressive institutions that would be required to turn Egypt into a totalitarian theocracy, which is the Brotherhood’s objective.

The Clinton Foundation’s Climate Initiative, which he worked on in Egypt, “taught Haddad about managing [a nongovernmental organization] and the role that civil society takes between the state and private sector, lessons he is applying to the Renaissance Project,” according to the Egypt Independent.

Haddad “officially became a senior adviser for foreign affairs in Morsi’s Freedom and Justice Party in May 2011, when he was still claiming to be employed by the Clinton Foundation,” the news website reports.

It was also reported that Haddad’s tenure at the Clinton Foundation “overlapped with his official work for the Muslim Brotherhood, which began in Cairo in February 2011 when he assumed control of the Renaissance Project, a Brotherhood-backed economic recovery program.”

Although the Renaissance Project has been described as a long-term economic recovery program, Egyptian media say it is actually a program designed to implement the radical Islamization of Egyptian society.

“Renaissance is far more than the electoral program of President Mohamed Morsi or the Brotherhood’s political wing, the Freedom and Justice Party,” according to the Egypt Independent. “It is a 25-year project to reform state, business and civil society, rooted in the Brotherhood’s Islamic values but conditioned by the experiences of the project’s founders in the modern economy.”

In Egyptian media, Haddad was a frequent apologist for the Brotherhood’s violent crackdowns on civil liberties. He put his spin doctoring skills to use downplaying Brotherhood supporters’ attacks on women and children.

And in a major non-coincidence, a mere month after Haddad quit his Clinton Foundation job for full-time employment with the Brotherhood in 2012, Morsi received an invitation to deliver a major address at the Clinton Global Initiative, a high-profile project of the foundation.

The Haddad saga is a sobering reminder not just of how close Hillary Clinton’s network is to the brutal Muslim Brotherhood, possibly the Left’s favorite Islamofascist operation, but also of the extent to which Islamist enemies of the United States have infiltrated the American political establishment.

Although in recent years Clinton’s former boss, Barack Hussein Obama, has hogged all the terrorism-related media oxygen, the Clintons have long been enablers of terrorist groups, Islamist and otherwise.

Listing all the pro-terrorist activities of the Clintons

Listing all the pro-terrorist activities of the Clintons would take up volumes, so let’s just recap some of what they’ve done over the years.

Hillary’s top aide who follows her from job to job is Huma Abedin. Abedin, who worked for Mrs. Clinton at the State Department and the Clinton-era White House, has since joined her favorite politician on the presidential campaign trail. Abedin has generational ties to Islamic terrorism and to the Muslim Brotherhood in particular. It is very difficult to believe that she hasn’t done her best to steer U.S. foreign policy in a pro-Muslim, pro-terrorist direction. Because Hillary’s has destroyed tens of thousands of her U.S. government-owned emails, we may never know if Abedin shared state secrets with America’s enemies.

We also know that after Hillary’s senior aides learned about the Sept. 11, 2012 terrorist attack on the U.S. facility in Benghazi, Libya, while it was in progress, the nation’s top diplomat did nothing to help the Americans under fire. “[H]er top staffers were informed from the start that a terrorist attack was underway and that an al-Qaeda-affiliated terrorist group had claimed credit for it.”

Instead Secretary Clinton devised a ridiculous story about an unwatched anti-Islam video and issued an official statement claiming the assault may have been in “response to inflammatory material posted on the Internet.” The statement added that “the United States deplores any intentional effort to denigrate the religious beliefs of others,” implying that the video inspired the attack.

During Hillary’s tenure at Foggy Bottom, the entry ban applying to Islamic scholar, stealth jihadist, terrorism funder, and grandson of the founder of the Muslim Brotherhood, Tariq Ramadan, was lifted.

Mrs. Clinton said a few months ago that the U.S. should use “smart power,” along with “every possible tool and partner” to advance peace. This includes “leaving no one on the sidelines, showing respect even for one’s enemies, trying to understand and insofar as psychologically possible, empathize with their perspective and point of view.”

While it is always wise to respect enemies in the sense of not being dismissive of their capabilities, empathizing with them would seem to go even further in sucking up to the Islamic world than President Obama has gone.

Both Bill and Hillary Clinton are terrorism enablers, though Hillary has the more developed pro-terrorist track record

At the State Department, for two years Mrs. Clinton strongly resisted efforts to put the al-Qaeda-affiliated group Boko Haram on its official list of foreign terrorist organizations. Now “lawmakers and former U.S. officials are saying that the decision may have hampered the American government’s ability to confront the Nigerian group that shocked the world by abducting hundreds of innocent girls.”

So much for Hillary’s feminist credentials.

All the 42nd president seemed to care about was power and the trappings of it. As bestselling author Richard Miniter has written, throughout that administration the Clintons “demanded absolute proof before acting against terrorists.” Setting the evidentiary bar so high precluded taking decisive action and may have been a key factor in President Clinton’s decision to let Osama bin Laden escape when he was in U.S. crosshairs.

When New York’s World Trade Center was bombed by Islamists on Feb. 26, 1993, President Clinton described the incident as “regrettable” and “treated the disaster … like a twister in Arkansas.” Before that he had “urged the public not to ‘overreact’” to the deadly attack on the financial heart of the nation.

Radical imam Siraj Wahhaj, an unindicted co-conspirator in the 1993 World Trade Center bombing, claimed to have ties to the Clinton administration. “I had dinner with [then-] Secretary of State [Madeleine] Albright — after the list” of unindicted co-conspirators was released. Wahhaj is also involved the Council on American-Islamic Relations (CAIR), which is the Muslim Brotherhood’s front group in the U.S.

Abdurahman Alamoudi helped President Clinton and the American Civil Liberties Union (ACLU) develop a presidential document called “Religious Expression in Public School,” which established a legal justification the ACLU could use to sue public schools to force them to remove Nativity scenes and curtail Christmas celebrations. Alamoudi is a former director of CAIR and founder of CAIR’s ally, American Muslim Council.

Bill Clinton also handed out get-out-of-jail-free cards to unrepentant Puerto Rican terrorists who were trying to win the territory independence from the U.S. through political violence.

The FBI concluded that the two radical left-wing groups to which that the 16 freed militants belonged were tied to well over 100 bombings, along with plenty of armed robberies, a half dozen murders, and hundreds of injuries.

Both Bill and Hillary Clinton are terrorism enablers, though Hillary has the more developed pro-terrorist track record.

In the eyes of leftists across America, this makes Hillary the perfect successor to President Obama.

In Case You Missed It:  9-11-2001 NEVER FORGET
Posted in Terrorism and tagged Clinton, Muslim Brotherhood, Terrorism.

Hear From Both Sides of the Same-Sex Marriage Debate