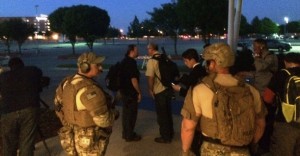 A clear and timely message to Baltimore, Maryland from Garland, Texas last night: police officers, risking their lives to do their jobs, keep civilian society safe.

Proven countless times and now once again: Civilian lives are safer, thanks to thousands of police forces across America,  whose intent is ‘To Serve and Protect’.

“Two gunmen were killed by police Sunday night after they opened fire wounding a security officer at a Texas art competition featuring works depicting the Muslim prophet Muhammad, a practice that is strictly forbidden in Islam.” (Matthew Vadum, May 4, 2015)

“The fact the event was attacked is proof that free speech needs protection in America, event organizer and author Robert Spencer told this writer in a late-night telephone interview.”

Before political bureaucrats at Homeland Security could even get their usual ‘no connection to terrorism’ meme off the ground through the mainstream media, one of the two gunmen was identified as Elton Simpson, who was convicted of lying to federal agents about traveling to Africa five years ago – but a judge ruled it could not be proved that he was going to join a terror group. (Daily Mail, May 4, 2015).

“A former terror suspect has been named as one of the gunmen shot dead by police after two attackers blasted an unarmed security guard in the ankle during an anti-Islam art contest in Texas on Sunday night.

“Two heavily-armed men, who are believed to have been carrying explosives, were killed by police after opening fire outside the Curtis Culwell Center in Garland, Dallas, at around 7pm during a controversial event where caricatures of the Prophet Muhammad were being displayed.

“A senior FBI official has identified one of the men as Elton Simpson, who was previously the subject of a terror investigation, according to ABC News.

“After his identity emerged, FBI agents and a bomb squad swarmed Simpson’s apartment in north Phoenix, Arizona and used a robot to carry out the first sweep of his home, the channel reported. The second gunman’s identity is not yet known.

“Ahead of the attack on Sunday evening, several Twitter messages were sent out, and authorities believe Simpson was behind them. The last one was shared just half an hour before the attack.

“Followers of ISIS had been calling for an attack online for more than a week after learning that the competition in Garland would feature a ‘draw Muhammad’ art contest, with a prize of $10,000 for the best caricature.

“After the attack, the SITE Intelligence Group reported that an Islamic State fighter claimed on Twitter that the shooting was carried out by two pro-ISIS individuals.

“In a series of tweets and links, a jihadist named as Abu Hussain AlBritani, which SITE said was British IS fighter Junaid Hussain, claimed that ‘2 of our brothers just opened fire’ at the Prophet Muhammad exhibition in Texas.

‘They Thought They Was Safe In Texas From The Soldiers of The Islamic State,’ added the tweet.”

They were “safe in Texas”  and will be, as long as lib-left politicians of the day allow police forces to do their job and sworn commitment to protect the public.

“The two suspects had pulled up in a vehicle with with explosives, before getting out and firing at a security officer, 57-year-old Bruce Joiner, who was employed by the independent school district and wearing a ‘police-style uniform’. He was later taken to hospital in a stable condition and was released on Sunday evening. (Daily Mail)

“Texas Governor Greg Abbott described the incident as a ‘senseless attack’ and praised the ‘swift action’ of Garland law enforcement.”

Where is the praise from the White House for police who saved the day?

It should be no surprise that the Garland attack came shortly after Dutch member of parliament and leader of the Party for Freedom, Geert Wilders, had delivered the event’s keynote speech.  There had been calls by the usual members of Congress for him to be stopped at the border so he would not be able to speak.

‘We are here in defiance of Islam to stand for our rights and freedom of speech,’ he said during his speech shortly before the building was shut down. ‘That is our duty… Our message today is very simple: we will never allow barbarism, never allow Islam, to rob us of our freedom of speech.’ (Daily Mail)

Wilder’s address was met with a standing ovation from a crown of 150.

Just days before the Garland attack, Wilders had been invited to address a press conference held by Reps. Steven King and Louie Gohmert at the Triangle in Washington, D.C. Congressmen Keith Ellison (D-Minnesota) and André Carson (D-Indiana), who had sent a letter to John Kerry and Homeland Security asking them to bar Wilder as a speaker for the event by keeping him from entering the United States, attempted to interrupt the tiny group.

What happened in Garland last night underlines how the riots in Baltimore—which at heart seek to replace police forces with the military-styled one coveted by President Barack Obama—have ties to terrorism.  The Nation of Islam—personally thanked by Mayor Stephanie Rawlings-Blake, who have thrown in with the Bloods and the Crips, are masquerading as the ‘good guys’ fighting the ‘bad guys’ (police).

Meanwhile, the one hash-tag that should dominate the digital world should be the one that reads: #copssavecivilianlives.

In Case You Missed It:  Over Two-Thirds of Republicans Think Biden Should Be Impeached and Tried for Treason if GOP Wins Back the House
Posted in Freedoms, Terrorism, Tyranny and tagged Democrats, Geert Wilders, Islam, Jihadists, Muslim, Obama, Terrorism, Texas.

Victim Blaming: CNN Attacks Pam Geller “The Bitch Was Begging For It”

by JOHN NOLTE Because Jeff Zucker is hoping to salvage CNN by turning the news narrative into a left-wing reality...