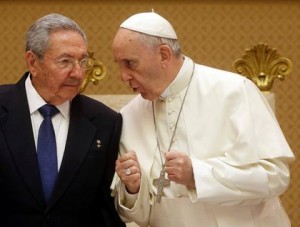 Pope Francis recently made headlines by asserting himself on the issue of climate change and by declaring that the Vatican recognizes Palestine as a separate state. Both issues are highly controversial, and each elicits strong emotional responses from both sides.

Meanwhile, the world and the Catholic Church were literally rocked by a vote in Ireland in which gay marriage won landslide support.

Dublin – The once-dominant Catholic Church in Ireland was trying to come to terms Sunday with an overwhelming vote in favor of gay marriage, saying it needed a “new language” to connect to people.

As jubilant “Yes” supporters nursed their hangovers after partying late into the night following Saturday’s referendum result, the faithful attended mass to hear their priests reflect on the new social landscape in Ireland.

“The Church has to find a new language which will be understood and heard by people,” Archbishop of Dublin Diarmuid Martin, a senior Irish cleric, told reporters after mass at the city’s St Mary’s Pro-Cathedral.

“We have to see how is it that the Church’s teaching on marriage and family is not being received even within its own flock.”

Perhaps the Pope should be spending more time on strictly family and marriage issues and LESS time on political matters like climate change and the middle east?

In Case You Missed It:  One out of every 800 people over 60 who gets vaccinated for covid DIES, says scientist
Posted in Freedoms.

Nun: ‘Islam Is ISIS. Whoever Says Otherwise Is a Liar’

WASHINGTON -- The Islamic terror group ISIS is leaving a trail of destruction across large parts of Syria and Iraq...