By Pamela Geller:  Germany’s vice chancellor said today it could take in one million migrants this year. Despite reinstated border checks, Sigmar Gabriel says anyone seeking asylum in Germany can stay until ruling on their case is made. 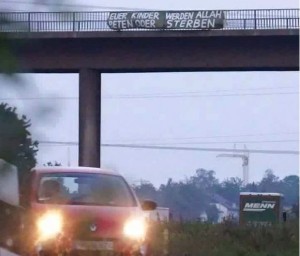 Here’s what they can expect.

This al hijrah is a Muslim invasion.

The above photo was taken over the weekend in Sindelfingen,  Germany, close to the Mercedes Factory.

Europe (and the U.S. under Obama) are importing jihad. For years, I have warned against the massive Muslim immigration under refugee resettlement programs. What are Muslims fleeing? Shariah law?

Immigration jihad, or hijrah, is the migration or journey of Muhammad and his followers from Mecca to Yathrib, later renamed by him to Medina, in the year 622 CE. It was after the hijrah that Muhammad for the first time became not just a preacher of religious ideas, but a political and military leader. That was what occasioned his new “revelations” exhorting his followers to commit violence against unbelievers. Significantly, the Islamic calendar counts the hijrah, not Muhammad’s birth or the occasion of his first “revelation,” as the beginning of Islam, implying that Islam is not fully itself without a political and military component.

Banner photo thanks to Armaros.

Pope Francis Warning on Refugee’s; Says ISIS can use Refugees to Infiltrate Europe

By Theodore Shoebat So it looks like Pope Francis is seeing the realty of the refugees. He stated on a...