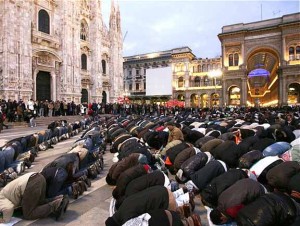 At  the very time when global borders should be tightly monitored because of the ISIS invasion, Europe is faced with a tsunami of migrants. I choose to call them migrants because they are far from all being “refugees.” The guidelines of acceptance vary from one European country to the next. It goes from Germany having pledged to receive in excess of 800,000 refugees to Turkey, Greece, Bulgaria, Macedonia, and Hungary building fences and walls to prevent anyone from entering illegally. The one thing that all these European countries have in common is a lack of preparedness for such a tidal wave of people.

To be sure, there has always been a somewhat steady flow of immigrants to Europe. They have always been attracted by better lives and safer environments and even in some cases, financial independence.

France opened its doors to Algerian, Moroccan and Tunisian migrants in the 1950s. They came as guest workers and received the jobs that native Frenchmen wouldn’t dare touch such as garbage collectors, street sweepers and construction workers. Today, their kids and grandkids are French citizens constituting a hard to ignore voting power as seen during the last French presidential elections.

Too many, too fast:
It would almost appear that the refugee crisis happened overnight. It seems like the on-going Syrian civil war is forcing people out. Nobody can argue with one’s decision to leave their native land to escape persecution, oppression and even death. So the question isn’t about the validity of the Syrian refugee flight. One of the concerns is the sheer number of migrants. For 20 years now, the “New Europe” has allowed people to move freely between its borders, acting as if it had virtually erased them all. But the recent flow of migrants has many European countries reconsider and re-close their borders. Germany still believes that they can welcome at least another 800,000 migrants. Chancellor Merkel is under the assumption that her refugee intake will help balance out the dangerously low native birthrate. I am not convinced that we are comparing apples to apple here! There isn’t one country in Europe that has the infrastructure to assimilate such a flow of people properly. We have already seen issues in the area of space needed, health and safety. Curiously enough, most Gulf States like Saudi Arabia, Qatar, Oman, the UAE, Bahrain and Kuwait that speak a similar language, have similarity in culture and religion have taken none. NONE! They do have the space and are some of the richest countries in the world and they have taken none, WHY?

Not all Syrians are Syrians:
And that is all before we even entertain the concept of some of the migrants being impostors. When I speak of impostors, I actually mean two different kinds. First we have those who claim to be Syrians but are not. We could call them the “desperate impostors”. Technically, only legal immigrants can remain in a host country. Others, without the proper application of identification papers will be sent back. Of course, this doesn’t apply to war or political refugees. Syrians qualify as refugees of war and as such have a much greater rate of acceptance (98%). Since the publication of the 1951 Refugee Convention by the UNHCR, a refugee is a person who from “fear of being persecuted for reasons of race, religion, nationality, membership of a particular social group or political opinion, is outside the country of his nationality and is unable or, owing to such fear, is unwilling to avail himself of the protection of that country; or who, not having a nationality and being outside the country of his former habitual residence as a result of such events, is unable or, owing to such fear, is unwilling to return to it.” Going by that definition, Syrians qualify as refugees, along with other countries being plagued by civil unrest. In reality, many people are flooding the European borders with little or no proof of Syrian citizenship.

A Potentially Dangerous mix:
Then we have those who choose to pose as Syrians to be granted asylum and benefits but know all along that they enter a country with a different agenda. These are dangerous individuals that we could call the “radical impostors.” They belong to Al-Qaeda, ISIS and other terrorist organizations. Their immigration isn’t a result from persecution and/or oppression but rather based on their desire to infiltrate, recruit, train and deploy more terrorists. The last 18 months have shown us the damage inflicted by ISIS infiltration and recruitment. The current wave of migration will only exacerbate the whole problem. It is virtually impossible to detect a Syrian from a non-Syrian refugee, so how do various European governments expect to detect ISIS impostors? Good luck with that!

An Unlikely Assimilation:
Being migrants in search of a better life or refugees seeking asylum, the vast majority of these people have Islam in common. In and of itself, this shouldn’t be a concern since the very definition of who qualifies as a refugee includes freedom of religion. Yet it should now be very obvious to the West that Muslims do not integrate and assimilate very well if at all. This isn’t to say that all the incoming Muslims are a menace to Europe, but there is a danger to the cultural and religious divide that is being created by their insertion into the respective countries. And frankly, ISIS’ recruits have almost exclusively been from Islam sympathizers of all sorts. Yet there is also another possibility that most westerners are unaware of and that is part of Islam’s ideology. It is some sort of “stealth jihad” akin to the changing demographics due to European Muslim high birthrates of the last 50 years. It is known as the Islamic doctrine of migration or hijrah.

The Muslim Migration Known as Hijrah :
Islam’s expert Robert Spencer writes: “To emigrate in the cause of Allah – that is, to move to a new land in order to bring Islam there, is considered in Islam to be a highly meritorious act,” . He then quotes Islam’s holy book: “And whoever emigrates for the cause of Allah will find on the earth many locations and abundance, And whoever leaves his home as an emigrant to Allah and His Messenger and then death overtakes him, his reward has already become incumbent upon Allah. And Allah is ever Forgiving and Merciful” (Quran 4:100).
While the original concept of hijrah is based on Mohammed’s flight from Mecca to Medina, it can also be applied to modern Muslim migrations. It is usually referring to leaving a country were Muslim are persecuted for one where they are welcome and can join other Muslims. But it can also refer to their moving to a non-Muslim country considered to be a “lesser evil.” This goes against every fiber of postmodernism, multiculturalism and tolerance, yet it is happening in front of our very eyes. Again, this doesn’t mean that every Muslim is to be treated as a potential terrorist, although I have no doubt that many will end up being manipulated into the radical Islamist agenda, either against their will or even unbeknownst to them.

Europe might not yet be on the edge of extinction but in light of the current refugee crisis, it is running the risk of reaching that point of no return sooner than expected. Many European countries already have a severe “native birthrate drought” and are seeing a demographic Muslim takeover. I am all in favor of helping refugees, but now is not the time to uncontrollably open borders to unknown Muslim migrants. This blurred combination of stealth jihad, demographic jihad and radical apocalyptic jihad is a lethal cocktail that Europe doesn’t seem to be able to control!

by PAUL JOSEPH WATSON According to an investigation by Swedish newspaper Dala-Demokraten, Arab migrants are being promised ‘free blonde Swedish...