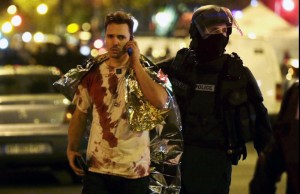 A French radio reporter who was inside the Bataclan theatre that came under attack Friday gave a harrowing account of the “10 horrific minutes” when black-clothed gunmen wielding AK-47s entered and fired calmly and randomly at hundreds of screaming concertgoers.

“It was a bloodbath,” Julien Pierce, a reporter for France’s Europe 1 radio station, told CNN.

“We heard so many gunshots and the terrorists were very calm, very determined and they reloaded three or four times their weapons and they didn’t shout anything. They didn’t say anything.”

Pierce recounted seeing 20 to 25 bodies on the floor and others very badly injured.

Police sources later said at least 100 people were killed at the attack on the concert venue.

Another witness said gunmen shouting “Allahu akbar” (God is greatest) fired into the terrified crowd who had gathered to watch a concert by the American rock band Eagles of Death Metal at the Bataclan theatre in eastern Paris on Friday night. 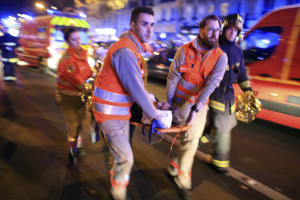 Pierce said he was lucky to be near the front of the stage as the gunmen, wearing black clothes and wielding AK-47s, opened fire.

“People started to try to escape to walk on people on the floor and try to find the exits, and I found an exit when the terrorists reloaded their guns in the meantime, and I climbed on the stage and we found an exit.”

The journalist said he took a teenage girl who was bleeding heavily and carried her to a taxi where he told the driver to take her to hospital. Ambulances were seen racing back and forth in the area into the early hours of Saturday, and hundreds of survivors were evacuated in police buses. French television said Paris hospitals were overwhelmed with wounded.

He said that as he was speaking to CNN some of his friends were still hiding inside the theatre.

“They are hiding in some kind of room in the dark and they text me, and they are very afraid, of course, and they are waiting for the police to intervene, but it’s been over two hours now and this is terrible.”

Later in the night police stormed the venue. Three suspected assailants were shot dead during the assault.

Pierce said he saw the face of one of the gunmen, who was probably 20 to 25 years old.

“What happened was terrible. I mean, honestly, 15 minutes, 10 minutes of gunshots firing randomly in a small concert room. I mean, it’s not a huge concert room. It’s a small one. Two thousand people were there maximum and it was — it was horrible.”

Sounds of AK47s and grenades were heard and reports of explosive belts caused a catastrophe including a massacre. One report...