In a little-noticed interview with radio talk show host Alex Jones, Nation of Islam leader Louis Farrakhan praised Donald Trump for an unwillingness to be bought like most politicians and sympathized with his proposal to bar Muslim immigrants. 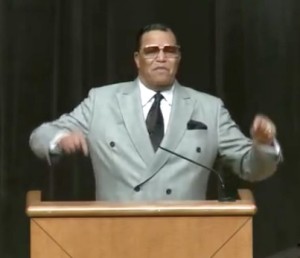 Farrakhan suggested keeping them out of this country is prudent given all the anti-American hatred that U.S. foreign policy fomented in the Middle East.

“So when Mr. Trump said, ‘We can’t allow these Muslim refugees into America,’ a lot of people were upset with him but I know, sir, the hatred for America in the Muslim World is building as we told Mr. Bush: No Muslim leader could call for jihad and have it stick,” Farrakhan told Jones in 90 minute interview for his radio show posted online on Wednesday. “No Muslim leader had the power to unite the whole Muslim World. I said, ‘But America’s policies will unite those people against the West’and it is happening.”

“So in this way, Mr. Trump I think is wise to [vet] anyone coming from that area into America because the hatred for America is in the streets now. So if those people are refugees and America feels ‘I got to let 10,000 of them in,’ because America created the problem. Now, if you let them in and you don’t [vet] them carefully, you might be letting in your own destruction.”

Farrakhan worried that Trump as president might fall under the influence of neoconservatives and attempt to seize Iraqi oil.  But domestically Farrakhan repeated Trump’s frequent line that he can not be bought.

“I looked at the many Republicans and Democrats that are trying to win the nomination of their party. It says to me, I don’t want to be vulgar, but it’s like in any major city, you see women undressed, showing their wares for a John to buy them,” he contended. “And it’s like politicians who don’t have money but have ideas and parade themselves before rich and powerful people to get money apparently for their ideas that the rich agree with. But the moment that they become what they are looking to become, they find that the rich have an agenda for them.”

“And that’s one of the things that I admire about Mr. Trump because he told them all: ‘I don’t want your money.’  And when a politician does not want money from the rich, he’s freer than the others to really do good for the masses of the people, and I think that today we’re in the midst of the darkest hour in American history. If we don’t make the right move, with the right people, at the right time, the America that we know, we’re not going to see it become great again.”

Ammon Bundy, 3 others arrested in Oregon amid shots fired – reports

Ammon Bundy, the leader of the armed group occupying a federal wildlife refuge near Burns, Oregon, and three others have...