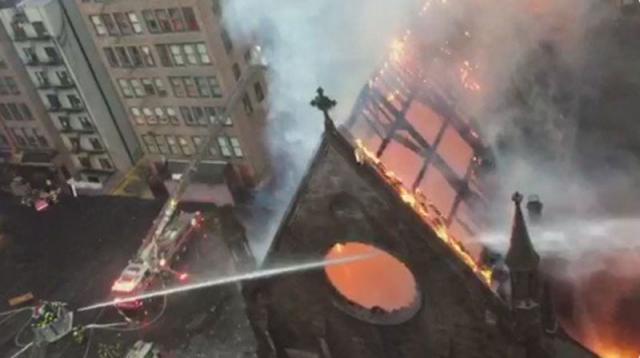 Investigators in four cities are looking into large fires at Orthodox churches that occurred around the religion’s Easter celebrations and caused widespread damage.

The blazes in New York City, Russian Monastery in Russia as well as Melbourne and Sydney in Australia, caused only minor injuries, according to multiple reports.

The New York City conflagration on Sunday at the Trinity Chapel Complex that was host to the Serbian Orthodox Church in Manhattan produced dramatic images of flames shooting through windows that filled social media.

The four Orthodox Churches were burnt in the past 2 days and those Churches are:

May the Lord have mercy on those who caused such devilish acts.

(Above) The historic Serbian Orthodox Church in New York was gutted by fire on Monday morning.

Valaam monastery, on an island in Lake Ladoga in Karelia, northern Russia, is a popular destination for pilgrims and tourists. Known for its natural beauty as well as revered religious sites dating back to the 14th century, the island is visited by more than a hundred thousand people every year.

Investigators are looking into foul play, this weekend was Orthodox Pascha (Easter) and in many places this happens to them regularly. Usually done by some group with a hatred for the church’s home-country, often seen in Serbia done by Muslim Bosnians.

In Case You Missed It:  Propaganda: Biden’s Treasury Dept. claims no U.S. funds are being misused in Ukraine in latest push to justify more aid
Posted in Freedoms and tagged Australia, Christianity, Christians, New York, Russia.