The critics of Obamacare have been proven right.  The Obama administration promised that health insurance premiums would go down.  Instead, they have absolutely 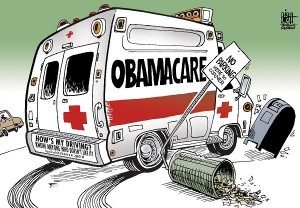 We witnessed the latest stunning example of this phenomenon just a few days ago.  It turns out that Aetna has been losing hundreds of millions of dollars on plans sold through the health exchanges, and now they plan to pull out of the program almost entirely…

The people that are being hurt the most by Obamacare are those that belong to the middle class.

As I mentioned above, employers are now hiring less workers because of Obamacare, and that is very bad news for the middle class.  One recent study conducted by the Federal Reserve Bank of New York discovered that nearly one out of every five firms is “employing fewer workers” because of this insidious law…

And middle class Americans that have to pay for their own health insurance are being hit with much higher bills these days.  According to one recent study, it is being projected that the average Obamacare premium will go up 24 percent in 2016…

Now, courtesy of a new study by independent analyst Charles Gaba – who has crunched the numbers for insurers participating in the ACA exchanges in all 50 states – we can also calculate what the average Obamacare premium increase across the entire US will be: using proposed and approved rate increase requests, the average Obamacare premium is expected to surge by a whopping 24% this year.

Even NBC News, which is about as pro-Obama as you can get, is reporting on the crippling premium increases that are devastating the middle class…

Millions of people who pay the full cost of their health insurance will face the sting of rising premiums next year, with no financial help from government subsidies.

Renewal notices bearing the bad news will go out this fall, just as the presidential election is in the home stretch.

“I don’t know if I could swallow another 30 or 40 percentwithout severely cutting into other things I’m trying to do, like retirement savings or reducing debt,” said Bob Byrnes, of Blaine, Minnesota, a Twin Cities suburb. His monthly premium of $524 is already about 50 percent more than he was paying in 2015, and he has a higher deductible.

All over the nation people are getting hit like this.

Personally, my health insurance company wanted to nearly double the rate I was paying when Obamacare fully kicked in.  So I searched around and found another plan that was only about a 30 percent increase, but at least it wasn’t nearly double what I had been paying before.

But when the time came to renew that plan, they wanted to jump my premium up another 50 percent per month.

Those of us that are in the middle are being crushed by Obamacare.  We aren’t poor enough to qualify for government assistance, and we aren’t wealthy enough for these ridiculous health insurance premiums not to matter.

Just about everything that Barack Obama promised us about Obamacare has turned out to be a lie.

So where in the accountability?

This is one of the big reasons why nearly one out of every five U.S. adults lives with their parents or their grandparents these days.  Many young adults cannot afford the basics of life such as health insurance, and so they have got to find a way to cut back expenses somewhere.  If that means moving back in with Mom and Dad, that is what some of them are going to do.

I am astounded that our system of health care has become so messed up.  But this is just more evidence of how our society is falling apart in thousands of different ways, and I am not optimistic that things will be turned around any time soon.

In Case You Missed It:  World Health Organization Issues New Gender Guidance: ‘Sex Is Not Limited To Male Or Female’
Posted in Tyranny and tagged Obamacare.

“Obama’s Insane Plan” Internet Oversight Switch: ‘If You Cherish Free Expression,’ ‘You Should Be Worried’

FCC Commissioner Ajit Pai (R) stated that the plan to “essentially give up the US oversight role…of the Internet” to...