So far at least three bodies have been recovered and at least 100 were hurt, some of them critically, when an NJ Transit train crashed into the station in Hoboken at the height of Thursday’s morning rush, leaving twisted piles of metal and bricks and causing part of the highly trafficked terminal to collapse, officials said.

Preliminary reports suggest the crash involving train No. 1614 on the Pascack Valley Line was accidental or caused by operator error, according to four law enforcement officials, though they stress it is early in the investigation.

This Train crash comes only 12 days after an improvised explosive device in a backpack detonated near the Elizabeth train station on Sept 18th.  Authorities found five devices inside a single backpack near the train station, including one that was detonated. After the explosion, press and bystanders were moved back because the four other explosive devices inside of the backpack were still believed to be live.

Pictures on social media showed serious damage to the train and extensive structural damage to the station. At least one of the NJ Transit cars appeared to be partially inside the building, with some of the supporting beams that hold up the canopy where the trains come in caved in around it.

It appeared the train went through a bumper stop at the end of the track. It came to a stop in a covered area between the station’s indoor waiting area and the platform. From above, chopper footage showed the glass arches atop the building crunched like an accordion over the platform.

Nancy Bido, a passenger in the first car of the train, told NBC 4 New York the train “just felt like it never stopped. It didn’t slow down. It didn’t brake.”

Others said the train seemed to be moving faster than usual as it entered the station, but they didn’t think much of it — until the impact.

“You felt like this huge, huge bang,” said passenger Steve Mesiano. “The lights went off, and then you started to see like –- I was in the window seat, so I could see like outside, what was happening, and the roof just collapsed on the first car.”

Tearful passengers described people screaming, bloodied and trapped in the first car. Several people who were on the train tweeted they felt “lucky to be alive.”

A woman was seen pinned under concrete. A lot of people were bleeding; one guy was crying.

Nearby Jersey City Medical Center said it had sent several trauma and emergency units to the scene, which was swarming with and first responders within minutes of the crash. Another hospital said it had received four patients and was expecting additional victims. 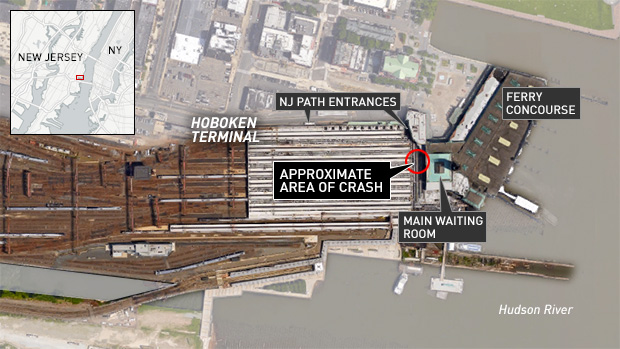 By Walid Shoebat A “duo came across the airline tote bag on the sidewalk between 8 and 9 p.m. on W....