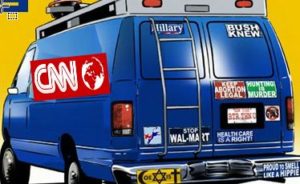 Among the batch of 8,263 emails released on Sunday night, one shows that staff working for the network hosts asked DNC staffers what questions they should put to the Republican candidate.

They also asked for advice when it came to an appearance from former candidate, Ted Cruz.

An email dated April 28 entitled ‘Cruz on CNN’ reads ‘CNN is looking for questions. Please send some topical/interesting ones.’

That email was sent from DNC research director Lauren Dillon to other officials and staffers.

Days before that, on April 25 she asked for questions from officials and staffers for an interview that CNN’s Wolf Blitzer would be conducting with Trump.

Wolf Blitzer is interviewing Trump on Tues (sic) ahead of his foreign policy address on Wed,’ Dillon wrote in the email that was entitled ‘CNN questions for Trump.’

Numerous questions were submitted by a group of DNC staffers and officials for 68-year-old Blitzer to ask the billionaire.

However, in a follow-up email, she informed the group of staffers that the Trump interview ended up being cancelled.

‘CNN said the interview was cancelled as of now but will keep the questions for the next one Good to have for others as well,’ Dillon wrote in the email.

Blitzer, who has been working at CNN since 1990, did end up interviewing the real estate mogul on May 4.

That interview took place right after both Cruz and Ohio Gov. John Kasich dropped out of the Republican presidential race as candidates.

A CNN spokeswoman told the Daily Mail Online the emails are ‘completely unremarkable’.

‘When preparing for interviews we are regularly sent suggestions from rival campaigns and political parties, both solicited and unsolicited,’ she said.

In a separate conversation dated on April 28, Jason Seher, a writer for Jake Tapper’s show on CNN, emailed Pablo Manriquez, a former DNC media booker thanking him for ‘facilitating Luis coming on today, and bearing with us through a meelee (sic) of GOP nonsense and cancellations and all that. Any particular points he’ll want to make? We’re gonna stay Dem focused…’

In responding, Manriquez said he would include Dillon and Christina Freundlich into the conversation to see ‘if there’s any newsworthy (opposition) Luis can drop’.

Freundlich previously worked for the Iowa Democratic Party before she caused outrage when she took a selfie smiling in front of a deadly New York City fire in March 2015. She was hired as a spokeswoman for the DNC in July 2015.

Manriquez then sent a message to several staffers and wrote, ‘Window closing on this. Need to know asap if we want to offer Jake Tapper questions to ask us.’

The Tapper email had been published by Wikileaks before in a separate set of leaks.

At the time Tapper responded that the emails did not suggest bias because there were similar communications with every other aspect of the political spectrum.

‘One critic suggests that this betrays a certain ‘coziness’ with Democratic officials,’ he wrote on his blog.

‘I disagree – we work very hard to make The Lead and State of the Union fair and I think we have developed a reputation for good nonpartisan journalism; I think the staffer was just being collegial.

‘That said, it’s a good lesson for everyone in journalism and beyond that emails get hacked and things get misconstrued.

“Any particular points he’ll want to make?” is a fairly standard question – producers and reporters ask it all the time of Democrats, Republicans, everyone, to make sure we don’t miss out on news-making opportunities.

The emails suggest that the DNC staff took the message as going further than that, believing it was an invitation to provide questions.

The latest email release by Wikileaks comes two days before the presidential election.

The release also follows criticism the Cable News Network faced after emails showed that DNC interim chairwoman Donna Brazile, who worked at the network as an on-air contributor, leaked questions to the Clinton campaign for a debate and a town hall event. 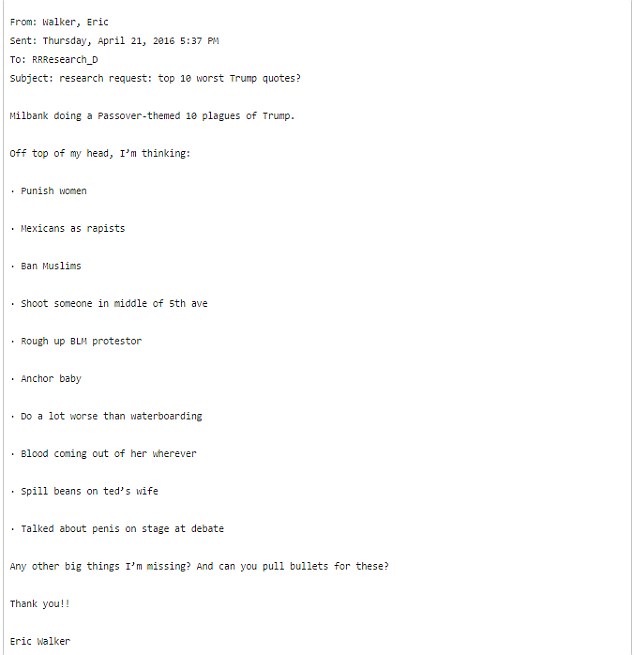 Another DNC email chain found in this huge batch of emails released by Wikileaks appears to show that Washington Post columnist Dana Milbank asked the DNC for help with research for a column he wrote about Trump in April 2016.

His column titled, ‘The Ten Plagues of Trump,’ featured a list of things the Republican presidential candidate said that he deemed as ‘outrageous.’

Walker was provided with a list of things that could be used to help Milbank.

One of the ‘plagues’ listed by Milbank in his column was ‘Blood’ and focused around the quote from Trump regarding Fox News anchor Megyn Kelly.

The internal DNC emails suggest that the columnist asked for a list that he possibly used to assist him in writing the column, as eight of the plagues match up with suggestions that were sent by the DNC.

A Coup Against the Constitution

A New York Times editorial Monday on the Senate’s role in the confirmation process not only gets it wrong, the...