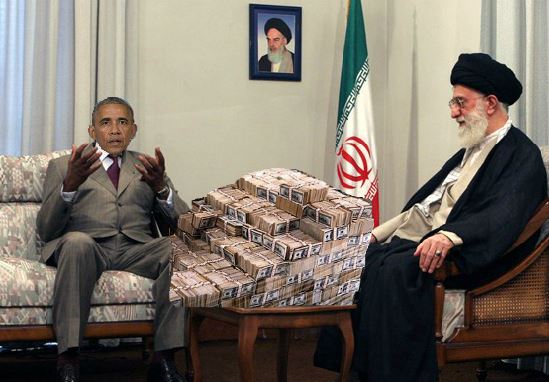 On Thursday, all of the attention of Trump-impeachment-obsessed Democrats and the majority of their news media minions was focused on the hearing of fired FBI director James Comey.

These President Donald Trump-hating leftists were disappointed when Comey testimony showed that: Trump is not now, nor has he ever been, under investigation by the FBI; President Obama’s attorney general, Loretta Lynch, told Comey not to call the probe into Hillary Clinton’s endless scandals an “investigation,” but rather a “matter”; and that Comey himself leaked his own memo about meetings with Trump, giving them to a leftist university professor to secretly turn over to a news media denizen.

But on Thursday, there was another hearing that uncovered much more explosive and disturbing information: President Barack Obama and his administration disbanded national security units which were originally charged with investigating Iran’s network of Islamic terrorism funding.

Obama, Valerie Jarrett (born in Iran), Susan Rice and other members of the former President’s inner-circle “systematically disbanded” special law enforcement units throughout the federal government that were investigating the Iranian, Syrian, and Venezuelan terrorism financing networks. Obama and his Secretary of State John Kerry were concerned the counter-terrorism units would lead to Iranian officials walking away from Obama’s precious nuclear deal with Iran, according to a former U.S. official with expertise in dismantling criminal financial networks.

The key witness during the Iran hearing, David Asher, had worked for U.S. Army Gen. John Allen at both Defense and State Departments. He testified before Republican and Democratic members of the House Foreign Affairs Committee that top cops and spies with several key law enforcement and intelligence agencies in the Obama administration were intentionlly prevented from targeting the terrorism financing operations of Iran, Hezbollah, and Venezuela during Kerry’s nuclear negotiations with his Iranian counterparts.

After months of investigating President Donald Trump’s unproven conspiracy with Russia’s President Vladimir Putin to derail the presidential campaign of Hillary Clinton, some lawmakers are turning their attention to the alleged deception by President Barack Obama and his minions to get his “do or die” nuclear deal with Iran.

Republican leaders of the House Committee initiated a full-scale investigation into the Obama administration’s activities getting a nuclear deal many believed was a farce at best, a deadly mistake at worst. They are also probing last year’s controversial prisoner swap with Iran for over a billion dollars.

Lawmakers and national security experts believed — and continue to believe — that Obama, his Secretary of State John Kerry and White House advisers actually hurt the U.S. government’s effort to end Iran’s nuclear weapons program. The so-called “pact” was also sold to the American people as a step in the right direction to ceasing the Iranian government’s weapons trafficking networks.

“A number of former intelligence and counter-terrorism officers were concerned with the way the deal was negotiated and the misrepresentation of the nuclear pact’s details by Obama’s questionable national security team,” said former military intelligence operative and police unit commander George O’Brien. “Remember how the assistant national security adviser Ben Rhodes admitted to being deceitful in order to get the deal accepted? That alone should have triggered a probe not only by Congress, but also the Justice Department,” Lt. O’Brien said.

In a May 5 letter, Republican Reps. Jason Chaffetz and Ron DeSantis asked Attorney General Jeff Sessions to produce Justice Department documents they said would “help the Committee in better understanding these issues.”  They sent the same letter to Secretary of State Rex Tillerson demanding all related documents to the Iran deal in the State Department’s possession.

Chaffetz has given both officials a May 19 deadline to provide one copy of them to committee Republicans, and another to the Oversight Committee’s Democratic Party lawmakers.

In part, the letter stated:

When President Obama revealed a prisoner exchange agreement with Iran in January 2016, he announced the release of one Iranian and six Iranian-Americans convicted of crimes or awaiting trial. The President described the exchange as a benign “reciprocal humanitarian gesture,” and went as far as to call the individuals released “civilians” who “were not charged with terrorism or any violent offenses.” Among those granted clemency were individuals that the Justice Department deemed threats to national security. The news account identified 14 Iranian fugitives accused of serious crimes for whom the Obama Administration dropped criminal charges, but never released the names or charges. These reports note an Iranian spokesperson contradicted the Administration’s position by claiming there were 28 Iranians “freed or relieved from judicial restrictions” as part of the prisoner exchange agreement. If true, this leaves seven individuals unaccounted for. [It was] also reported that Obama Administration officials blocked and delayed law enforcement efforts to lure Iranian fugitives to countries where they could be arrested and to extradite Iranian suspects in custody overseas.

Chaffetz also wrote to the officials, “please also make your staff available for a briefing on these issues no later than May 25.”

“The noose tightens, the clock is ticking and Jason Chaffetz will get to the bottom of this. Don’t forget Jason has an ace up his sleeve, Trey Gowdy is also on the committee investigating Obama. That should terrify him,” according to the Republican Post.

Dumping Dodd-Frank: How we get our economy back

By Monica Showalter For eight long years, the Obama administration delivered to us 1-2% GDP subpar growth.  It was a...