The future for Europe looks grim, not only are Europeans dealing with multiple terrorist attacks monthly now new reports are coming out that as many as 50,000 terrorist are living within Europe, this is a literal Army they allowed in. 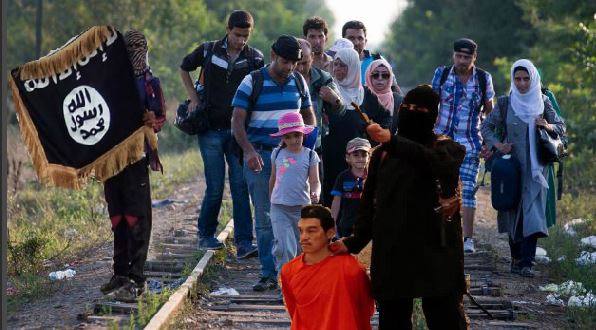 In an August 31 interview with the Spanish newspaper El Mundo, Gilles de Kerchove, the EU’s Counterterrorism Coordinator said that more than 50,000 jihadists are now living in Europe:

“Three years ago, it was easy to identify someone who has become radicalized. Now, most fanatics disguise their convictions. We do not have exact figures, but it is not difficult to do approximate calculations. United Kingdom, it is not a secret, it has been published, it has 20,000. France, 17,000. Spain much less, but more than 5,000, I suppose. In Belgium almost 500 have gone to Syria and there are about 2,000 radicals or more. I would not venture to a specific figure, but tens of thousands, more than 50,000.”

The European leaders have failed their people., destroyed the future for their children and grandchildren. The Paris attacks in November 2015 clearly demonstrated that irregular migratory flows are being used by Islamic terrorists to enter the EU. Two of the terrorists involved in the attacks had previously irregularly entered through Leros [Greece] and had been registered by the Greek authorities. They presented fraudulent Syrian documents to speed up their registration process.
Hundreds of migrants who entered Germany as asylum seekers in 2015 and 2016 are now being investigated for being members of Middle Eastern jihadists groups, according to the Federal Criminal Police (Bundeskriminalamt, BKA).

In Italy Islamic jihadists are posing as migrants and arriving from North Africa on boats across the Mediterranean and onto Italian shores. In an interview with The Times, Libyan Prime Minister Fayez al-Sarraj said that jihadists who had been able to pass undetected into his country were almost certainly making their way into Europe.

“When migrants reach Europe they will move freely,” said al-Sarraj, referring to the open borders within the European Union. “If, God forbid, there are terrorist elements among the migrants, any incident will affect all of the EU.”

In an interview with the Belgian daily Le Soir, de Kerchove warned that even if the Islamic State is militarily defeated, it will continue to thrive as a “virtual caliphate.” He also said that Europol, the European police office, has identified at least 30,000 active jihadist websites, but that EU legislation no longer requires internet service providers to collect and preserve metadata — including data on the location of jihadists — from their customers due to privacy concerns. De Kerchove said this was hindering the ability of police to identify and deter jihadists: “On metadata, I confess that we pull our hair out.”

The question remains,  how many Europeans have to be slaughtered by Islamic terrorist or raped before something is done?

A laptop computer that Rep. Debbie Wasserman Schultz, D-Fla., fought to keep prosecutors from examining may have been planted for...