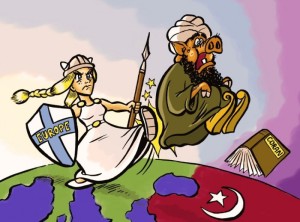 When talking about immigration, invariably the topic of Muslim immigration presents itself. There are U.S. citizens who believe that though Muslims have murdered many U.S. citizens in this country, Muslims committing the murders are not representative of Muslims as a whole.

“Don’t punish all Muslims for the sins of a few,” so to speak.

Experts estimate that between 15 percent to 25 percent of Muslims are terrorists, the ones who stab, behead, murder and massacre non-Muslims to make Islam the only system of governance in a country.

During World War II, most Germans were peaceful. However, the extremely violent Nazis drove the agenda and murdered 60 million people. The peaceful majority was irrelevant.

Also, in World War II, the majority of Japanese were peaceful, yet the Japanese murdered 12 million people. The peaceful majority was irrelevant.

On Sept. 11, 2011, the U.S. had 2.3 million Muslims – and it took only 19 Muslim terrorists to murder about 3,000 Americans. The peaceful majority was irrelevant. It was reported that the “peaceful majority” cheered at the news.

The peaceful majority of Muslims is not really benign, though. They provide aid and comfort to Muslim terrorists. I wouldn’t advise you to sketch a picture of a person and label it Mohammad and put it in your front yard when you have the “peaceful majority” walking in your neighborhood. To do so may cause your head to separate from your body when a Muslim terrorist happens to drop by your house.

The peaceful majority inform the terrorists in their group and will help terrorists escape. Ever hear of Muslims turning in one of their own due to suspicions of being a terrorist?

All Muslims have the same goal – make everyone Muslim, or dead. To not have this goal would mean they are not Muslim. The book they follow, the Koran, instructs them on this goal. Some Muslims pursue this goal more intensely (terrorists) than others (peaceful majority).

The truth about crime, illegal immigrants and sanctuary cities

BY RON MARTINELLI There has been much rhetoric from the left and the open-borders, pro-illegal immigration lobby suggesting that illegal...