Hundreds of posters urge Muslim men to marry non-Muslim women as a strategy to spread Islam
By Ezequiel Doiny
On august 22, 2014 the Times of Israel reported “Last week, a small far-right group protested in Jaffa outside the wedding of an Israeli Arab, Mahmoud Mansour, and his Jewish-born Israeli bride, Morel Malka, who had converted to Islam.”
https://www.timesofisrael.com/most-israeli-jews-and-arabs-oppose-intermarriage/
In Israel lehava activists were accused of racism and arrested for warning Jewish girls against intermarriage.
In Spain posters were found urging Muslim men to marry non-Muslim women to “strengthen” Islam. On March 8, 2017 Virginia Hale wrote in Breitbart “Hundreds of posters displayed in a migrant-dominated part of Barcelona are urging Muslim men to marry Spanish women in a bid to spread Islam…The posters, which are derogatory about Christians but call on ‘Brothers’ to marry women of the religion to “strengthen” Islam, have been plastered through the neighbourhood of El Raval. “Brother, enter a partnership with a Spaniard, teach her that Islam is the true religion. Islamic law dictates that the fruits of this alliance will follow Islam, which will further strengthen our community,” the main body of text reads.”
http://www.breitbart.com/london/2017/03/08/muslims-marry-christian-women-islam-spain/ 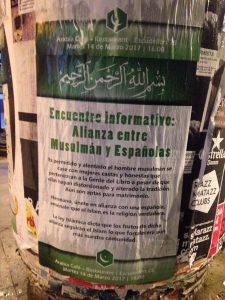 A child is Muslim if his father is Muslim, independent of the mother’s religion. Muslim men are permitted to marry non-Muslims. Muslim women, on the other hand,are not permitted to marry non-Muslims unless her husband converts to Islam. Numbers of interfaith marriages in Spain are not available but in England the number is significant exceeding 21,000 per year. During the last decade England’s Muslim population has doubled making Islam is the fastest growing religion. A Pew research published in 2013 reported that “Muslims around the world agree that Islam is the one true faith that leads to salvation. Many Muslims also say it is their religious duty to convert others to Islam….The belief that Muslims are obligated to proselytize is particularly widespread in sub-Saharan Africa. Across the region, at least three-quarters of Muslims believe it is their religious duty to try to spread Islam to non-Muslims.
A majority of Muslims in the South Asian countries surveyed also say trying to convert others to Islam is a religious duty. This sense is nearly universal in Afghanistan, where 96% of Muslims believe proselytizing is a duty of their faith. In Pakistan, 85% of Muslims share this view…
In the Middle East and North Africa, a clear majority of Muslims in most countries surveyed believe trying to convert others is a religious duty, including roughly nine-in-ten in Jordan (92%) and Egypt (88%)…”
http://www.pewforum.org/2013/04/30/the-worlds-muslims-religion-politics-society-interfaith-relations/
In the Spring 2009, Uriya Shavit and Frederic Wiesenbach wrote in Middle East Quarterly that “…Muslim scholars have called on immigrant Muslims to become involved in summoning non-Muslims to their faith. Indeed, the call on Muslim migrants to proselytize has become central in contemporary Islamic writings…In the West, freedom of religion allows for people of all faiths to convince others that theirs is the one and only truth; on the other hand, in some Muslim societies, non-Muslims are prosecuted, and promotion of other religions is a punishable offense…Exact data on the number of converts to Islam in the West is incomplete because conversions are not always recorded. While the data do not suggest a massive wave of new believers, there are enough to matter. In Germany, statisticians estimated that several thousand Christians convert to Islam every year.[2] In Spain, the number of converts reached around 20,000 in 2006,[3] and in the United Kingdom, perhaps 14,000 had converted by 2006.[4] In the United States, perhaps 20,000 to 25,000 people a year convert to Islam…Many Sunni scholars urge their co-religionists in the West to spread the word of God actively. The call to convert, which increased along with the number of permanent Muslim immigrants to Europe, is part of a larger framework of identity and duties constructed by Sunni religious scholars in the Arab world since the 1970s. Islamic scholars found that to ban or ignore mass Muslim migration would only alienate immigrants. Instead, they focused on strengthening the immigrants’ Muslim identity while using them in the service of Islam. They called upon Muslim immigrants to consider themselves part of a global Muslim nation; to legitimize their presence in non-Muslim lands by acting as ideal Muslims; to build Muslim institutions such as mosques and charity organizations; to serve the political interests of Muslims worldwide; and to proselytize.[7]…Hamdi Hassan, a professor of media studies at al-Azhar University in Cairo, wrote that the Muslim presence in Europe is an example of Muslim proselytizing turning from the defensive mode that characterized it during the eighteenth and nineteenth centuries to a new mode of expansion.[10]…In Saudi writings, these notions of proselytizing acquire a militant, confrontational tone. One source of these writings is the Saudi scholar Safr al-Hawali, who has invoked the need to conquer the West with da’wa, using terms unequivocal in their combativeness:
“And if one would ask: Why should we not invade Korea and Japan [as the Muslims have] human resources for da’wa? … to this someone else would answer: No, we should direct [the human resources for da’wa] to Europe and America. Who is right? The one who says the West. Why? Because [the West] is the enemy whose depth we must penetrate … It is the enemy who will attack us and is more dangerous to us.”[11]
…The right of any person to proselytize, or the right of any person to convert to a religion of his choice, is a basic tenet of Western liberal societies. The unique context of some Muslim conversion efforts should not be ignored, though: They do not envision two civilizations living in harmony, but one, Islam, gaining world domination…”
http://www.meforum.org/2104/muslim-strategies-to-convert-western-christians
Ezequiel Doiny is author of “Obama’s assault on Jerusalem’s Western Wall
In Case You Missed It:  US military to roll out Spike Ferritin Nanoparticle COVID vaccine (SpFN) that we fear is designed to kill active duty troops and weaken America's military defenses
Posted in Freedoms.

A federal court last week again ruled in favor of Mick Mulvaney as the rightful head of the Consumer Financial...