The Russian envoy to the chemical weapons watchdog group, OPCW, said that non-governmental organizations (NGOs) funded by the UK and US carried out the April 7 chemical attack in the Damascus, Syria suburb of Douma.

Russia’s permanent representative to the Organization for the Prohibition of Chemical Weapons (OPCW), Alexander Shulgin, said Russia has irrefutable evidence that there was no chemical weapons incident in Douma.

“Therefore, we have not just a “high degree of confidence,” as our Western partners claim, but we have incontrovertible evidence that there was no incident on April 7 in Douma and that all this was a planned provocation by the British intelligence services, probably, with the participation of their senior allies from Washington with the aim of misleading the international community and justifying aggression against Syria,” he stated. –Sputnik

Shulgin added that the US, UK and France are not interested in conducting an objective investigation of the attack site. “They put the blame on the Syrian authorities in advance, without even waiting for the OPCW mission to begin to establish the possible facts of the use of chemical weapons in Syria,” he said.

The nine-member OPCW mission people has yet to deploy to the city of Douma according to the organization’s Chief, citing pending security issues.

“The Team has not yet deployed to Douma. The Syrian and the Russian officials who participated in the preparatory meetings in Damascus have informed the FFM Team that there were still pending security issues to be worked out before any deployment could take place. In the meantime the Team was offered by the Syrian authorities that they could interview 22 witnesses who could be brought to Damascus,” OPCW Director-General Ahmet Uzumcu said as quoted by the organization.

The Russian Envoy says that the controversial “White Helmets” were one of the anti-Assad “pseudo-humanitarian NGOs” which staged the event. As Disobedient Media and others have reported, the White Helmets are funded in large part by the United States.

“The Syrian Civil Defense Force (aka the White Helmets) is funded in part by United States Agency for International Development (USAID). Included here are two links showing contracts awarded by USAID to Chemonics International Inc. (DBA Chemonics). The first award was in the sum of $111.2 million and has a Period of Performance (POP) from January 2013 to June 2017. It states that the purpose of the award will be to use the funds for managing a “quick-response mechanism supporting activities that pursue a peaceful transition to a democratic and stable Syria.” The second was in the sum of $57.4 million and has a POP from August 2015 to August 2020. This award was designated to be used in the “Syria Regional Program II” which is a part of the Support Which Implements Fast Transitions IV (SWIFT IV) program.” Via Disobedient Media 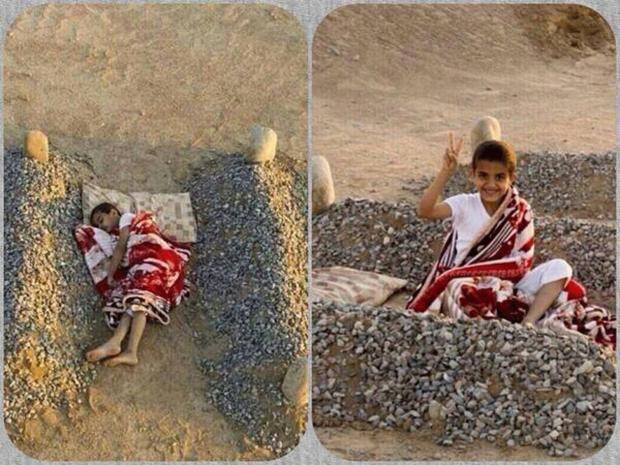 Remember this photo of a kid laying next to her ‘dead’ parents who were ‘killed’ by Assad and this photo went viral and got thousands of retweets and had people crying all over Twitter? 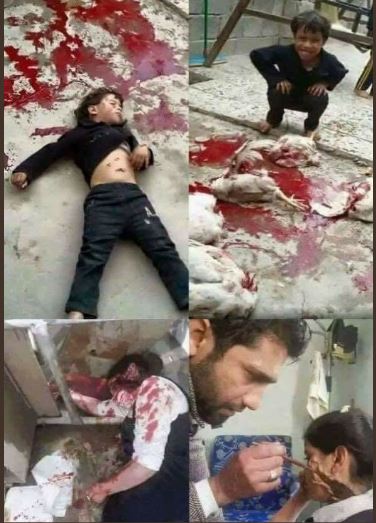 Moscow says they have confirmed that “these structures [NGOs] on a fee-based basis cooperate with the governments of the United States, the UK and some other countries.”

Russian experts who conducted the verification of reports on the use of chemical weapons in the Syrian city of the Douma, found participants of video filming, presented as evidence of the supposedly occurring chemotherapy, according to the Russian Envoy to OPCW. –Sputnik

“Everything has been developing according to the script that was prepared in Washington. There is no doubt that Americans are playing the ‘first violin’ in all of this. The United States, the United Kingdom, France and some other countries after the “fake” addition from the White Helmets and their ilk in Douma, immediately pounced upon the Syrian authorities with accusations,” Shulgin said.

Meanwhile, the U.S. has alerted the OPCW that Russia “may have tampered” with the chemical attack site in Douma…

“It is our understanding the Russians may have visited the attack site,” U.S. Ambassador Kenneth Ward said at a meeting of the OPCW in The Hague on Monday.

“It is our concern that they may have tampered with it with the intent of thwarting the efforts of the OPCW Fact-Finding Mission to conduct an effective investigation,” he said. His comments at the closed-door meeting were obtained by Reuters.

Russian Foreign Minister Sergei Lavrov shot back in a BBC interview, saying “I can guarantee that Russia has not tampered with the site.”

Earlier, Britain’s delegation to the OPCW accused Russia and the Syrian government of preventing the international watchdog’s inspectors from reaching Douma.

The inspectors aim to collect samples, interview witnesses and document evidence to determine whether banned toxic munitions were used, although they are not permitted to assign blame for the attack. –Reuters

“Unfettered access is essential,” the British delegation said in a statement. “Russia and Syria must cooperate.”

Moscow says the OPCW delay is due to the Western air strikes. Kremlin spokesman Dmitry Peskov said the British accusation that Russia was to blame for holding up the inspections was “groundless”.

“We called for an objective investigation. This was at the very beginning after this information [of the attack] appeared. Therefore allegations of this towards Russia are groundless,” Peskov said.

On Friday we reported that Russia’s foreign minister Sergey Lavrov said that Moscow has “irrefutable evidence” that the attack – which allegedly killed over 40 people, was staged with the help of a foreign secret service.

“We have irrefutable evidence that this was another staged event, and that the secret services of a certain state that is now at the forefront of a Russophobic campaign was involved in this staged event,” he said during a press conference according to AFP.

According to defense ministry spokesman, Major General Igor Konashenkov, the Kremlin has evidence that Britain was behind the attack.

Quoted by Reuters, he said: “We have… evidence that proves Britain was directly involved in organising this provocation.”

As RT further adds, the Russian Defense Ministry presented what it says is “proof that the reported chemical weapons attack in Syria was staged.” It also accused the British government of pressuring the perpetrators to speed up the “provocation.” During a briefing on Friday, the ministry showed interviews with two people, who, it said, are medical professionals working in the only hospital operating in Douma, a town near the Syrian capital, Damascus.

During a briefing on Friday, the ministry showed interviews with two people, who, it said, are medical professionals working in the only hospital operating in Douma, a town near the Syrian capital, Damascus.

During a briefing on Friday, the ministry showed interviews with two people, who, it said, are medical professionals working in the only hospital operating in Douma, a town near the Syrian capital, Damascus.

In the interviews released to the media, the two men reported how footage was shot of people dousing each other with water and treating children, which was claimed to show the aftermath of the April 7 chemical weapons attack. The patients shown in the video suffered from smoke poisoning and the water was poured on them by their relatives after a false claim that chemical weapons were used, the ministry said.

“Please, notice. These people do not hide their names. These are not some faceless claims on the social media by anonymous activists. They took part in taking that footage,” said Konashenkov.

“The Russian Defense Ministry also has evidence that Britain had a direct involvement in arranging this provocation in Eastern Ghouta,” the general added, referring to the neighborhood of which Douma is part. “We know for certain that between April 3 and April 6 the so-called White Helmets were seriously pressured from London to speed up the provocation that they were preparing.”

According to Konashenkov, the group, which was a primary source of photos and footage of the purported chemical attack, was informed of a large-scale artillery attack on Damascus planned by the Islamist group Army of Islam, which controlled Douma at the time. The White Helmets were ordered to arrange the provocation after retaliatory strikes by the Syrian government forces, which the shelling was certain to lead to, he said.

The UK rejected the accusations, with British UN Ambassador Karen Pierce calling them “grotesque,” “a blatant lie” and “the worst piece of fake news we’ve yet seen from the Russian propaganda machine.”

So when will Moscow release their evidence for the whole world to see? Or is it maybe waiting for the US to first release its own proof that Assad launched the attack?

If so, we’ll be waiting for a long time

In Case You Missed It:  Proof that the Taliban takeover was not Biden's incompetence But TREASON!
Posted in Terrorism and tagged Syria, War.

How 4 Big Comey Claims Stack Up to His Senate Testimony

Portions of former FBI Director James Comey’s new book on the end of his law enforcement career conflict with the...