The latest deep state biotch to claim President Trump molested her years ago turns out to also be connected to corrupt Democrat Lisa Bloom, a coincidence?   Of course not,  this isn’t the first time Ms. Bloom was connected to someone who wanted to slander the President and claim he abused her.  Liberals abusing the me too movements for political gains,  Lisa is of course the spawn of Gloria Alred.

These false claims take away from real women that are abused every day, and to use that platform for political gain is disgusting but the liberals will stop at nothing to take down conservatives.

Last week we reported that another woman falsely accused President Trump of sexually abusing her years ago.

E. Jean Carroll falsely claimed like in a New York Magazine article which was published on Friday that Donald Trump sexually assaulted her.

The accusation is actually from an excerpt from a new book Carroll is slinging — SHOCKER — she’s selling a book and wants publicity and wants to hurt Trump politically..

“Regarding the ‘story’ by E. Jean Carroll, claiming she once encountered me at Bergdorf Goodman 23 years ago. I’ve never met this person in my life. She is trying to sell a new book, that should indicate her motivation. It should be sold in the fiction section,” the president wrote.

“Shame on those who make up false stories of assault to try to get publicity for themselves, or sell a book, or carry out a political agenda—like Julie Swetnick who falsely accused Justice Brett Kavanaugh,” Trump asserted. “It’s just as bad for people to believe it, particularly when there is zero evidence. Worse still for a dying publication to try to prop itself up by peddling fake news—it’s an epidemic.”

Now it turns out that E. Jean Carroll is not just an ugly goofy looking freak of nature, she is connected to the very corrupt liberal Lisa Bloom.  A picture of the two criminal women from 2006 was just found. 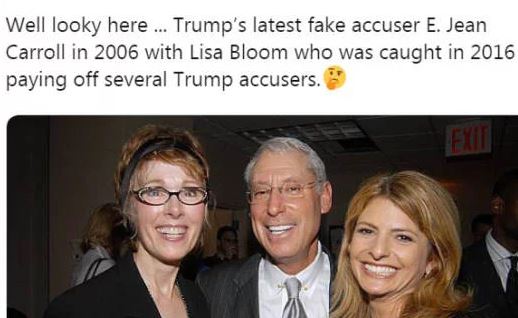 Of course psychopath Lisa Bloom is famous for paying off women before the 2016 election up to $750,000 each for accusing Donald Trump of sexually abusing them.  She and her mother Gloria Alred are famous for pushing fake sex scandals against conservatives while representing real predators like Harvey Weinstein. 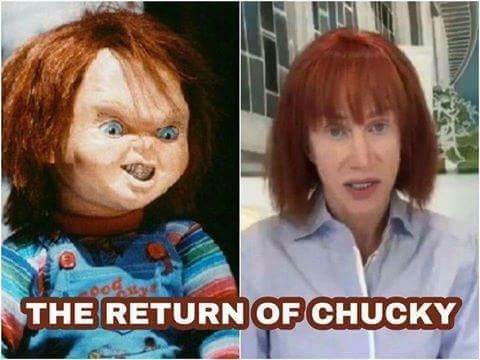 herself for holding a fake head that looked like President Trump with blood all over it.  After being called out for being violent and gross and not funny, Griffin hired Bloom and held a press conference.

During the conference a California reporter asked Chucky look alike Griffin about her bullying of 11 year-old Barron Trump.  Griffin and Bloom both defended the attacks on the president’s young son.  Then at the end of the presser the reporter pulled out an artist’s image of Kathy Griffin holding the head of her lawyer Lisa Bloom and asked if they thought it was appropriate.

This was stellar reporting by the California reporter!

Disgusting women like Gloria Alred and her daughter Lisa Bloom are hurting other women. Their lies in attempts to disparage conservatives are only making it difficult if not impossible for women who really are raped to find justice.

In Case You Missed It:  Homeless Man with 18 Prior Arrests Taken Into Custody For Choking, Raping and Robbing Female Jogger in New York City’s West Village
Posted in Tyranny and tagged Crime, Democrats, Liberalism, lie.

In early June the Islamist Congresswomen Ilhan Omar (D-MN) was ordered to pay a $500 civil fine for violating...