In surprising comments during an interview with the New York Post this week, President Trump mused: “There are a lot of people that think that he is not being treated fairly. I mean, I hear that.” 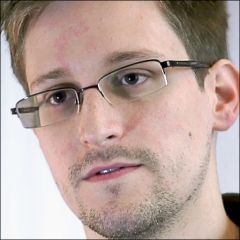 “I’m going to take a look at that very strongly,” Trump said during a news conference at his golf resort in Bedminster, New Jersey.

The comments, published in the Post Thursday, have unleashed widespread speculation that Trump could actually pardon whistleblower Edward Snowden at a moment political momentum is gaining from Republican-Libertarian voices in Congress.

Suggesting something is already in the waters, Kentucky congressman Thomas Massie (R) called out Trump on Friday, tweeting simply, “Donald Trump should pardon Edward Snowden,” while tagging both.

And Libertarian/Independent Congressman Justin Amash of Michigan tweeted in support for such a bold move from the president as well:

Edward @Snowden is a whistleblower who exposed unconstitutional surveillance practices that violated the rights of millions. He deserves the opportunity to return to the United States and receive a pardon as part of a fair process that examines his actions. https://t.co/JqVccAYd41

In the NY Post interview Trump was discussing his former advisor Carter Page in connection with allegations of abuse and illegal surveillance under the aegis of the Foreign Intelligence Surveillance Act and the secret FISA court.

He then reportedly questioned of his aides nearby:

The 37-year old Snowden has been living in Russia since leaking a huge trove of NSA documents in 2013. He first went to Hong Kong but then stopped in Russia while being pursued by US authorities, which he’s previously said was not his intended destination. He’s since been enjoying temporary asylum under Putin.

Should a pardon actually materialize, it could certainly energize Trump’s conservative anti-establishment base ahead of November, and on the other hand alienate further that very establishment in Washington.

The pressure would also then be on to pardon Julian Assange, though that would most certainly be met with even fiercer pushback from the US intelligence community.

And now conservatives see how easily NSA’s mass surveillance system, and the entire intelligence community apparatus, can be weaponized & abused for improper ends.

What Snowden showed the world was crucial for it to know. He’s spent 7 years in exile. He should be pardoned.

Republican hawks, but most certainly Democrats eager to revive the false Russiagate narrative going into the November election, would offer it as “proof” that Trump is somehow in cahoots the Russians (given longstanding accusations – though without evidence – that Snowden intentionally ended up in Russia where he’s cooperating with foreign intelligence).