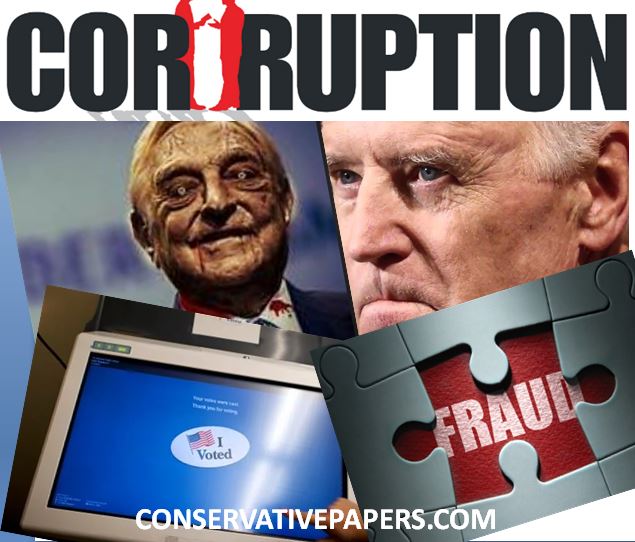 Evil That Men Do: Is Defective Software Used on Swing States a Virus Meant to Flip Elections?

Stunning Facts: Lord Mark Malloch Brown, a George Soros lieutenant, whose company Smartmatic, is intimately tied to Dominion Voting Systems who flipped votes from Trump to Biden. Brown was also named UN #2 – Deputy Secretary General on March 3rd,  2006, and also former VP of the World Bank. His machine was used in all the swing states. Could this help explain the MI 200,000 vote sudden dump of Biden ballots, while WI got 100,000 late night delivery?

How did a close George Soros associate , a Quantum Fund VP, who lived in his NYC apartment get accepted for crucial voting machinery?

Soros Minion: How did a close George Soros associate , a Quantum Fund VP, who lived in his NYC apartment get accepted for crucial voting machinery? Especially after Soros’ unrelenting attack on the US justice system by funding leftist DAs? Brown was concurrently Vice-Chair of Soros Fund Management & Vice-Chair of Open Society Institute. Is Lord Brown George Soros’ favorite lieutenant?

Agent Provocateur Brown: So, what kind of person is Lord Brown? He secretly advances Soros’ goals. An adviser to billionaire Beny Steinmetz, Brown ruthlessly used his position to relay confidential information to Soros about Steinmetz’ company to ruin a business deal. Brown was sued and fined  €90,000. Brown is also Anti-Brexit and a climate zealot. When criticized about his friendship with Soros, and living on his colossal farm, Brown claimed he was “doing God’s work.”

Failed Vote Software Company: Dominion is associated with vote disasters, “Dominion “got into trouble” with several subsidiaries it used over alleged cases of fraud. One subsidiary is Smartmatic, a company “that has played a significant role in the U.S. market over the last decade,” according to a report published by UK-based AccessWire. Litigation over Smartmatic “glitches” alleges they impacted the 2010 and 2013 mid-term elections in the Philippines, raising questions of cheating and fraud. An independent review of the source codes used in the machines found multiple problems.”

Smartmatic & Dominion Failures: Bloomberg criticized computer voter machines and software as inherently flawed in 2019. CBS News reported in 2019, “The voting machine lobby, led by the biggest company, ES&S, believes they are above the law,” said Sen. Ron Wyden, D-Ore. They have not had anybody hold them accountable even on the most basic matters.” Another concern is foreign ownership, and passive investors – like possibly Soros. Smartmatic’s figures were manipulated by 1 million votes in its 2017 Venezuela vote. Dominion failed in 2018 GA, but was retained, and failed again in GA and switched 6,000 ballots in MI this election, while PA, NV, AZ, WI, MN all used this. In 2019, GA citizens petitioned to have Dominion Voting Systems removed, as it failed in 2018 NV.

CONCLUSION: E-Voting Companies Run by Foreign Sociopaths? What do we really know about our voting machines and software? Hardly anything. For example, if a voting program was designed to throw 3% of the ballots to the opponent, how could that be detected? Writes the UK Guardian: “The fact is that democracy in the United States is now largely a secretive and privately-run affair conducted out of the public eye with little oversight. The corporations that run every aspect of American elections, from voter registration to casting and counting votes by machine, are subject to limited state and federal regulation. The companies are privately-owned and closely held, making information about ownership and financial stability difficult to obtain. The software source code and hardware design of their systems are kept as trade secrets and therefore difficult to study or investigate.” Let’s go back to hand written ballots and use electronics as a backup. That’s the only safe way versus electronic records.

In Case You Missed It:  Unedited Screengrab from Video of Pro-Abortion Protesters Outside John Roberts’ Home Appears to Show Demon in the Crowd
Posted in Tyranny.

By Frank Friday Whenever someone comes on TV introduced as a "national expert on American election law," change the channel, because...