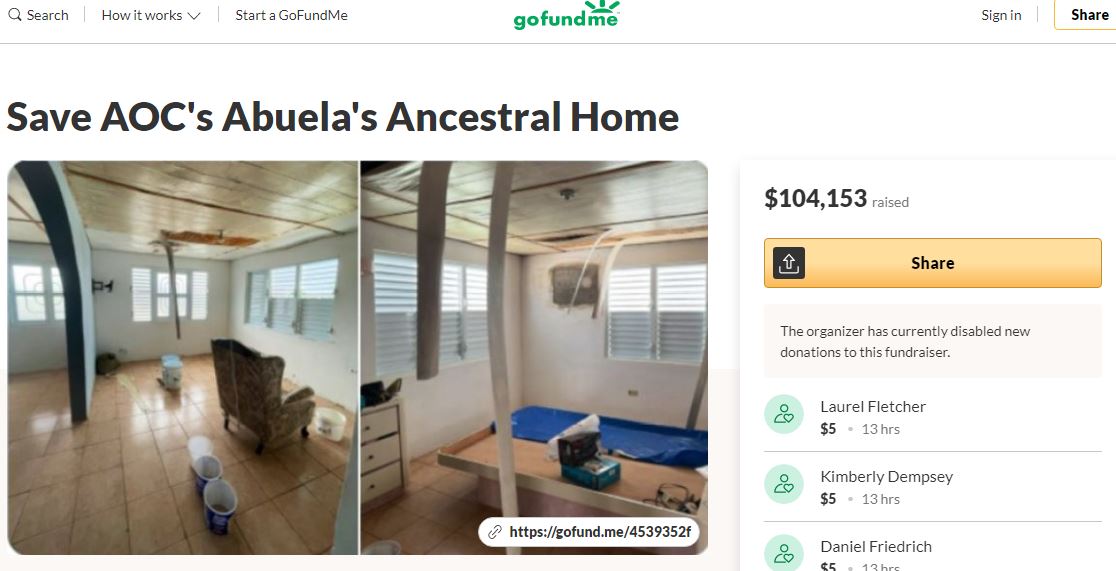 5,800 Republicans got together on Gofundme to raise over $100,000 for congresswoman AOC’s grandmother, as Ocasio-Cortez refused to help her own grandmmother and preferred virtue signalling to score political points instead.

Republicans stepped up to the plate to help grandma, while AOC refuses to do anything but complain and play the victim card.  AOC to date has refused to thank any of the 5,800 Republicans who donated to help her grandma. 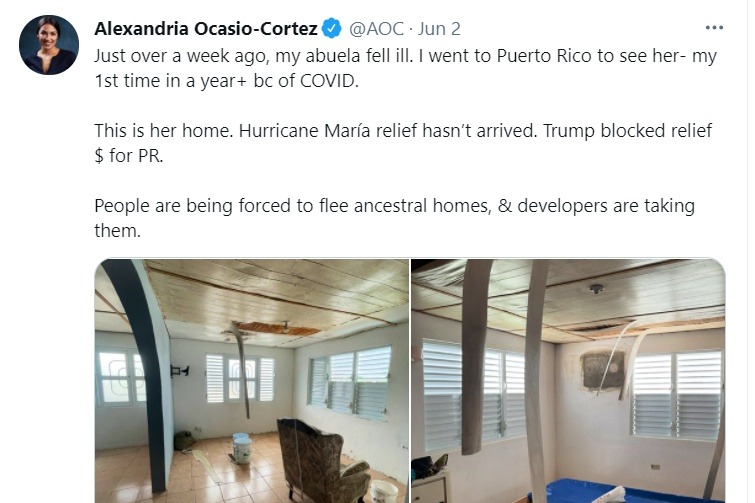 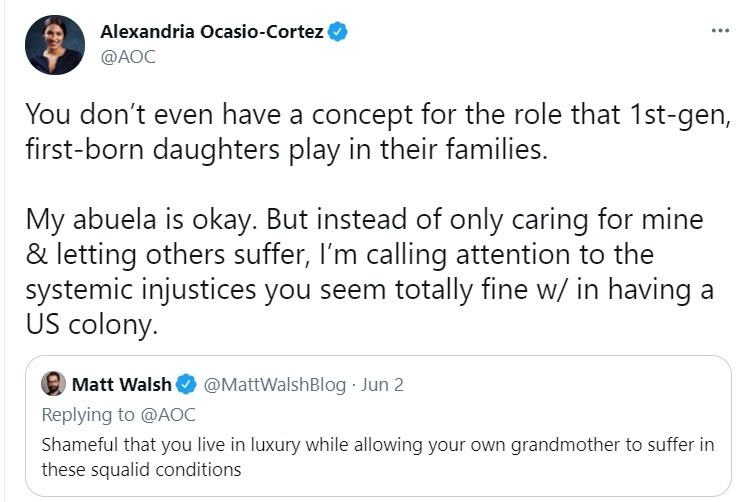 On June 2nd, Congresswoman Alexandria Ocasio-Cortez reported to Twitter  that her dear abuela has fallen ill and continues to live in squalid conditions since her home was ravaged by Hurricane María.

One cannot be certain of the cost to repair grandma’s house, but surely most of the work could be completed for the price of AOC’s shiny Tesla Model 3.

As AOC pointed out  to us, we “don’t even have a concept for the role that [incredibly successful children of two American citizens…] play in their families,” but clearly caring for their own grandparent isn’t part of it.

Says the congresswoman, “…instead of only caring for [my own grandmother] & letting others suffer, I’m calling attention to the systemic injustices…”

No, seriously. She really said that.

Sadly, virtue-signaling isn’t going to fix abuela’s roof. So we are.

Let’s all kick in to help save AOC’s abuela’s ancestral home. Any amount is appreciated, but the cost of a monthly lease payment on that Tesla is around $499…

All proceeds will be donated to abuela, if she will accept them.

UPDATE: “Someone” in AOC’s abuela’s family told GoFundMe that she won’t take our money, even though AOC previously claimed that her grandma was in dire straits (and it was Trump’s fault). AOC still hasn’t acknowledged this effort or thanked us. Instead, she seems to think that it is worth $104,153 of her abuela’s money to express that doesn’t want money from the likes of us. Abuela could have accepted the money and donated it to charity, but it seems AOC preferred to insult the 5.800 people who donated.

GoFundMe is issuing a refund and assures us that 100% of every donation will be refunded within 3-7 business days. The email from GoFundMe is copied below.

Tragically this charitable effort has been sabotaged by forces outside of our control. Still I’m grateful for the outpouring of support for Abuela, even if AOC isn’t. But questions remain: Why didn’t AOC help her own abuela? Why was our help turned down? We are left to speculate.

In the end, our campaign raised 100 thousand dollars and could have solved a problem in ten hours that AOC couldn’t solve in four years. We can all be proud of that. As for Abuela, all we can do now is pray.

In Case You Missed It:  Bidenomics: US To Totally Collapse after Dollar Collapses
Posted in Financial and tagged Democrats, Ocasio-Cortez, Republicans, Socialism.