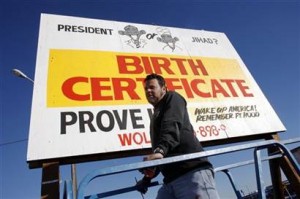 WHEAT RIDGE, Colo. – A billboard showing President Barack Obama wearing a turban has sparked a lot of attention at the suburban Denver used car dealership that put it up.

The sign, completed Friday by artist David Lee, shows a grinning, cartoonish Obama and bears the words “PRESIDENT or JIHAD?”

Underneath the president’s image is a big yellow square with the phrase, “BIRTH CERTIFICATE, PROVE IT!”

The words “WAKE UP AMERICA! REMEMBER FT. HOOD” appear at the bottom of the billboard at Wolf Interstate Leasing and Sales, about seven miles west of Denver. The sign is visible from Interstate 70.

Army psychiatrist Maj. Nidal Malik Hasan, a homegrown terrorist and U.S. citizen born to Palestinian parents, has been charged in the Nov. 5 mass shooting at the Army post in Fort Hood, Texas, that left 13 dead and more than 30 wounded.

Lee said there were plenty of honks from car horns as he painted the billboard.

“One lady came by and gave me the ‘shame, shame’ look,” said Lee, of Arvada, another suburb of Denver.

The left-leaning advocacy group MoveOn.org called the billboard “racist” and was asking customers to boycott the dealership.

Lee said the billboard has previously held other slogans questioning the president’s citizenship, along with routine ads for cars.

The so-called birther movement claims that Obama was born outside the United States or held dual citizenship and is ineligible to be president. The Constitution states that a person must be a “natural-born citizen” to be eligible for the presidency they cannot have dual citizenship or allegiance to two countries.

Obama’s Hawaii “short form” birth certificate along with birth notices from the two Honolulu newspapers were the only documents brought forward by Obama so far. State officials in Hawaii have confirmed that Obama was born in Honolulu although they are unable to release Obama’s long form without his authority or the authority of a court. Hawaii become a State around the time Obama was born, short forms were provided without background checks to those whom simply swore they were born in Hawaii, long forms were provided only to confirmed births. If he held dual citizenship at one time is unknown.

MOSCOW- A Russian Orthodox priest known for his outspoken criticism of Islam and attempts to convert Muslims to Christianity has...