Vince Veneziani- Japan denies it, but rumors persist that the country may dump Treasuries. Bloomberg continues to fan the flames.

Bloomberg: Speculation that the Japanese government plans to sell $100 billion of U.S. Treasury debt to pay for domestic spending may impede the Obama administration’s borrowing plans.

Japan has been this year’s biggest buyer of Treasuries, which means it has done more to help finance the widening U.S. budget deficit than any other country. Its holdings have risen by $125.5 billion, according to data compiled by the Treasury. 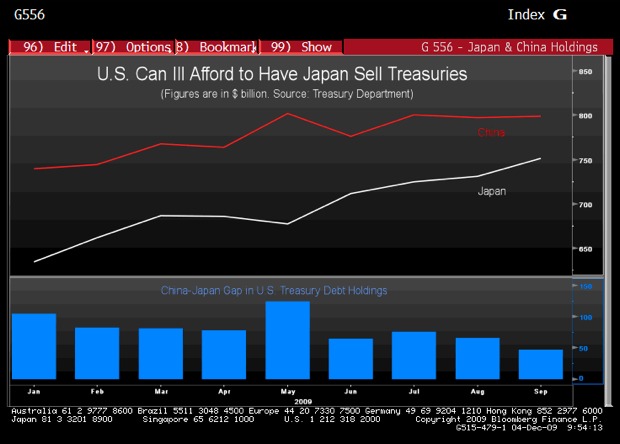 The relationship between new Japanese Prime Minister and Obama is strained over the Okinawa base issues and he needs to revive Japan. Besides the Japanese are not pleased over the dollar slide literally killing the Japanese exports.

In Case You Missed It:  Get Ready for the Economic Collapse
Posted in Financial and tagged Bonds, Economy, Japan.

COP15 guests are being offered free sex if they produce one of Lord Mayor Ritt Bjerregaard’s ‘no sex’ postcards. Copenhagen...