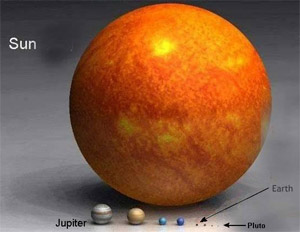 The sun, a million times larger than the earth, is the nuclear power station that controls the climate of the Earth and every other planet in the solar system.

The heliocentric (sun-centered) cosmology pioneered by Copernicus shattered the anthropocentric mythology that put man at the centre of the universe.

This Medieval mythology viewed natural disasters as acts of God caused by human sin. The popular belief that human activity is the main cause of catastrophic global warming is essentially a return to the religious, guilt-ridden mythology of the pre-Copernican age. Read More

Carbon dioxide is not to blame for global climate change. Solar activity is many times more powerful than the energy produced by the whole of humankind. Man’s influence on nature is a drop in the ocean. -Dr. Oleg Sorokhtin, Merited Scientist of Russia and fellow of the Russian Academy of Natural Sciences and staff researcher of the Oceanology Institute.

* Climate change has been happening on this earth for millions of years.
* The global warming of the last hundred years has in been entirely within the range of natural variability
* The warmer periods of history such as the Holocene Optimum, the Roman Warm Period, and the Medieval Warm Period, have all proved to be beneficial in terms of human prosperity and progress. The warming 20th century has been no exception.

2. Climate Change is governed by the sun.

* The sun is the primary driver of climate change on planet Earth and every other planet. Everything from ice ages to warm interglacial periods (some much warmer than our present interglacial period) has been caused by the natural variations of the sun’s irradiance, magnetic fields, solar winds, solar flares and sun-spots. Plus the solar inter-play with cosmic rays, variations in the earth’s orbit around the sun and the tilt of the earth upon its axis.
* The oceans, comprising 71% of the earth’s surface, store and distribute the sun’s heat energy. That heat energy is distributed by ocean currents and ocean evaporation which in turn influence air currents, cloud formation and precipitation. The enormous size of the oceans relative to the atmosphere means that the oceans always dominate the exchange of heat energy between hydrosphere and atmosphere. More than anything else within the earth itself, the oceans are by far the most dominant influence on climate.

3. Climate change is not driven by human CO2 emissions.

* The so-called greenhouses gases, which are more than 90% water vapour, act like an insulation blanket to make the climate more equable and the planet liveable. Carbon dioxide and methane, comprising 3.6% and 0.9% of all greenhouse gases respectively, are minor players. Water vapour completely dominates the greenhouse effect.
* Human CO2 emissions account for only 2.91% of all CO2 emissions according to the US Department of Energy or 3.67% according to the IPCC’s AR4. Whichever figure we take, human C02 emissions are not much more than 0.1% – one part in a thousand – of all greenhouse gases.
* CO2 accounts for 0.038% of the total atmosphere. The human CO2 emissions, being around 3% of 0.038%, are not much more than 1 part per 100,000 parts of the atmosphere. Take a closer look at the numbers and don’t be fooled by the greenhouse scare campaign.
* On-going observations and temperature measurements in the real world indicate that the climate system is not very sensitive to rising CO2 levels in the atmosphere. Any modest warming effect of C02 is modified by the “negative feedback” of much bigger players such as surface evaporation, cloud formation and precipitation.
* Bottom line: there has never been any proof that human emissions of CO2 are a significant factor in global warming.

* World temperatures peaked in 1998 – ten years ago – and the downward cooling trend has been unmistakeable since about 2002. It’s now official that 2008 has been the coldest year this century. The world has continued to cool whilst CO2 levels in the atmosphere have continued to rise. The AWG thesis that rising CO2 levels cause a corresponding rise in temperatures has collapsed.
* All the signs indicate that the sun has gone into one of its recurring quiet phases.
* If this solar trend continues, the earth will continue to cool despite human CO2 emissions and despite the projections of any of the Climate Models.

The world has spent $50 billion on global warming since 1990, and we have not found any actual evidence that carbon emissions causes global warming. Dr. David Evans

Creating an ideology pegged to carbon dioxide is a dangerous nonsense. The present alarm on climate change is an instrument of social control, a pretext for major businesses and political battle. Delgado Domingo’s, Environmental Scientist, Portugal, the founder of the Numerical Weather Forecast group.

Being a member of Congress rates as the least ethical and honest professions – faring worse than car salesmen by...