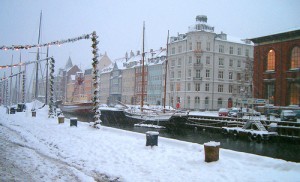 Like just about every other big, international conference, from world trade to human rights, it appears the Copenhagen climate summit has ended in a complete fiasco.

BBC: Negotiations at the UN climate summit have been suspended after the African group withdrew co-operation.

African delegations were angry at what they saw as moves by the Danish host government to sideline talks on more emission cuts under the Kyoto Protocol.

As news spread around the conference centre, about 200 activists responded with chants of “We stand with Africa – Kyoto targets now”.

Between the “Climategate” leaks, and another set of leaks about how developed countries planned to screw over developing ones, the whole thing was doomed from the start. And even without those snags, it was all talk.

There’s no way all the countries in the world can come together and unilaterally slow down their economies for something as vague as climate change, potentially a century off. That’s the bottom-line.

100 REASONS WHY CLIMATE CHANGE IS NATURAL

HERE are the 100 reasons, released in a dossier issued by the European Foundation, why climate change is natural and...