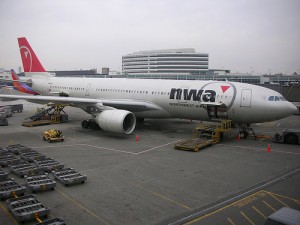 Seconds after passengers spotted flames climbing above the back of a window seat midway down the left side of Northwest Flight 253, Friday’s routine descent toward Detroit’s main airport turned into horror, mayhem and instant heroism.

Just as the widebody Airbus A330 made a rumbling sound as the landing gear started down, horrified travelers in seats around the young Nigerian later detained as a terrorism suspect started screaming, according to eyewitness reports by passengers. Flight attendants quickly joined the hubbub around the man in seat 19A, repeatedly screaming “What are you doing?”

There was a pop and then smoke wafted through the cabin. A passenger then climbed over several seats, lunged across the aisle and managed to subdue the suspect, the eyewitnesses said. The Nigerian Islamic man was placed in a headlock before being dragged up to the first class cabin. Passenger Zeina Seagal told CNN that after the terrorist was collared and parts of his burning pants were removed, flight attendants quickly grabbed fire extinguishers and doused the fire at his seat.

“We saw the fear in the flight attendants eyes” when they ran in the aisles and “grabbed the fire extinguishers,” Michelle Keepman, a passenger who had been seated near the back of the plane, recalled.

Many of those seated further back didn’t initially understand the reason for all the commotion. Roey Rosenblith, a director of a solar-power start up in Uganda, was in seat 38J, near the rear exits, when he heard the sounds of a struggle coming from many rows ahead. “People were yelling and screaming,” he recalled hours later in an interview, sipping a bottle of water at a hotel near the airport.

When a flight attendant sprinted down the aisle past his seat and then ran back in the opposite direction clutching a fire extinguisher, Mr. Rosenblith realized something was seriously wrong, he recounted. “At that point everybody was terrified.”

With some passengers whispering there had been some kind of fire, the pilot announced the plane was going to land immediately. A male flight attendant came over the intercom to say, “We’re landing! We’re landing! Everybody in your seats!” Mr. Rosenblith recalled.

In a stark departure from the typical passenger instructions issued prior to touchdown, the same attendant added, “Your federally trained flight attendants have taken control of the situation!” according to Mr. Rosenblith.

By then, the pilots had declared an emergency, the plane was descending rapidly toward the runway and the suspected Islamic terrorist, tied to one of the first-class seats, was uncommunicative. Melinda Dennis, who was sitting in first class, told CNN that the terrorist had been “burned severely on his legs.” She said he slumped during the landing, without talking or answering questions.

When the flight touched down, fire trucks and emergency vehicles, with lights flashing and sirens blaring, followed the plane as it taxied to a stop. The captain then spoke and apologized for the incident, Mr. Rosenblith recalled. “He said he wished these things didn’t happen, and said it seemed somebody brought firecrackers on the plane,” Mr. Rosenblith said.

Over the next few hours, each passenger went through a security screening and was questioned by law-enforcement officials in the international baggage claim area. All of the baggage in the plane’s belly was screened, as well.

Mr. Rosenblith said he was asked if he had noticed a man videotaping on the plane before take off, and again as the incident played out. He said he believed authorities were looking for the man with the camera, but he couldn’t determine if investigators suspected if this individual could be an accomplice. The Federal Aviation Administration and the Transportation Security Administration declined to talk about the specifics of the investigation.

At one point during the ordeal, passengers were told that the man who helped subdue the Islamic attacker was exiting the plane. A female passenger who was seated 13 rows behind the suspect recalled the scene clearly. The woman, a nurse from Dayton, Ohio, described a blonde man with his fingers individually bandaged, and another bandage around his palm. A few people, she said, began to clap as he walked by.

Reflecting the new, more proactive security role that has emerged for passengers in the wake of the 9-11 terrorist attacks in the U.S., Rep. Peter King (R., N.Y.) told Fox News, “they were the first responders in this attack; they got the job done.”

Fannie and Freddie Executives to get Millions

Mortgage Execs' Hefty Salaries To Be Disclosed Federal regulators plan to disclose Thursday that the top executives of government-controlled mortgage...