Terry Hoskins said he would do ‘what it takes’ 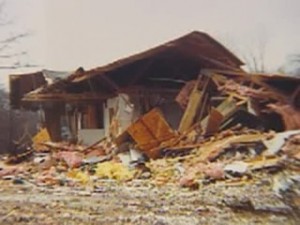 Like many people, Terry Hoskins has had troubles with his bank. But his solution to foreclosure might be unique.

Hoskins said he’s been in a struggle with RiverHills Bank over his Clermont County home for nearly a decade, a struggle that was coming to an end as the bank began foreclosure proceedings on his $350,000 home.

Hoskins said the Internal Revenue Service placed liens on his carpet store and commercial property on state Route 125 after his brother, a one-time business partner, sued him.

The bank claimed his home as collateral, Hoskins said, and went after both his residential and commercial properties.
Hoskins said he’d gotten a $170,000 offer from someone to pay off the house, but the bank refused, saying they could get more from selling it in foreclosure.

Hoskins told News 5’s Courtis Fuller that he issued the bank an ultimatum.

“I’ll tear it down before I let you take it,” Hoskins told them.
And that’s exactly what Hoskins did.

Man Says Actions Intended To Send Message To Banks
The Moscow man used a bulldozer two weeks ago to level the home he’d built, and the sprawling country home is now rubble, buried under a coating of snow.

“As far as what the bank is going to get, I plan on giving them back what was on this hill exactly (as) it was,” Hoskins said. “I brought it out of the ground and I plan on putting it back in the ground.”
Hoskins’ business in Amelia is scheduled to go up for auction on March 2, and he told Fuller he’s considering leveling that building, too.
RiverHills Bank declined to comment on the situation, but Hoskins said his actions were intended to send a message.

“Well, to probably make banks think twice before they try to take someone’s home, and if they are going to take it wrongly, the end result will be them tearing their house down like I did mine,” Hoskins said.”

Romney to Obama: Stop Blaming Others for Failure