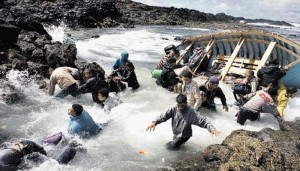 DiePresse– The redistribution of the World: By 2050 Europe’s native populations will shrink, while the populations of Africa and Asia will bloom. This will increase the invasion of Europe by African Muslims estimated to be at 2,000,000,000 by 2050.

The Scandinavia will grow due to massive importation of Muslims, as will France and Ireland.

The real threat comes from Africa. The continent will double its population in forty years thanks to George Bush, Bill Clinton and the idiot, Bill Gates. Most, naturally, want to invade Europe.

In forty years, the population of the third rock from the Sun will be 9,000,000,000 carbon-based-life-forms. The war over food, oil, water, and raw materials will increase. Pollution will be hell.

Welcome to the diverse world of idiots.

Thank you for publishing this important article of the German magazine ‘Die Presse’ of 19 February 2010. I assume the here described future prospects can bring every reader to shiver. The prognoses are no science fiction. If we would not be careful, we will bring this Armageddon upon us!.

I’ m living in a ‘multicultural’ neighborhood in The Hague (the Netherlands) and have the pleasure of living among Muslims and Africans. I can assure you it is a nightmare!.
The tsunami wave of African negroes came here recently. You never see here a former tenant leaving. One night he or she (mostly Dutch) disappears and in the morning ten Africans come out of the door. The first thing they always do, is joining one of the criminal gangs who are active in the neighborhood. Within few months they are the proud owners of a new BMW or a sport Mazda. With their new Muslim gang mates they do their best to chase away the few Dutch who are still here.

I have learned from experience that Africans have no built in feelings of moral or social behavior. That explains their cruelty in their homeland by chopping people with machetes, burning whole villages and other atrocities. It’s their way of life. They are entitled to live the way that sooths them- in Africa!. But this mentality cannot fit in Western Europe; even if the leftwing parties like to subject them and us to an anthropological experiment in a multicultural laboratory.

We have to make the leftists clear: Stop behaving to your own voters as guinea pigs!.

Terry Hoskins said he would do 'what it takes' Like many people, Terry Hoskins has had troubles with his bank....