by Daniel Pipes
May 29, 2010
Cross-posted from National Review Online

Barack Obama entered with high hopes of improving the U.S. image among Muslims worldwide, hauling out his middle name, giving his first interview as president to Al-Arabiya television, quoting hadith, giving major speeches in Istanbul and Cairo, and talking ceaselessly of “respect” for Muslims. Where has this got him?

The Gallup Poll conducted face-to-face interviews with 1,000 adults aged 15 and older in each of Mauritania, Algeria, Egypt, the Palestinian Territories, Lebanon, and Iraq (a curious collection of places). It asked the same question once in 2008, twice in 2009, and now for the first of two times in 2010: “Do you approve or disapprove of the job performance of the leadership of the United States?” The margin of error ranges from ±3.1 percent to ±3.9 percent.

Also noteworthy is that Obama’s current standing has declined among all six of the populations from what it was in mid-2009. The smallest drop (3 percent) was in Iraq and the largest (18 percent) in Egypt.

Comments: (1) These polls register a highly unimpressive showing for someone who placed so much emphasis on improving U.S. standing among Muslims. (2) The graph of Arabic-speakers’ attitudes toward Obama differs from that of Americans’ views: the former went up and then down, while the latter went down and then flattened out. That said, both at present share a downward trend. 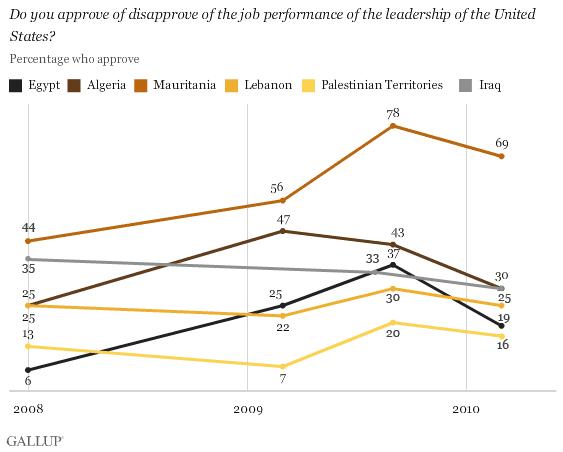 In Case You Missed It:  Rock Legend Roger Daltrey Of ‘The Who’ Slams Woke Culture Of The Left: ‘Will Lead To Misery’
Posted in Terrorism, Tyranny and tagged Egypt, George W Bush, Iraq, Islam, Jihad, Muslims, Obama, Palestinians, Polls, Terrorism.

This past Wednesday, the United States crossed a very expensive milestone: U.S. national debt exceeded $13 trillion.  It is a...