The Muslim Student Union at UC Irvine should be suspended for one year for its involvement in repeated disruptions of a February speech by Israeli Ambassador Michael Oren, according to a disciplinary report released by the university. 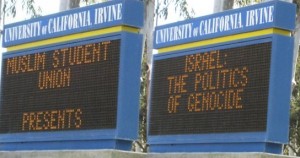 The Muslim Student Union has appealed the recommendation.

The speech about U.S.-Israeli relations was interrupted 10 times by students who got up and yelled out things like, “Michael Oren, propagating murder is not an expression of free speech.”

Eleven UC Irvine and UC Riverside students were arrested and cited for disturbing a public event, but none have been charged. The student group maintained that the disruptions were done by individuals and not organized by their group, but the report cited internal Muslim Student Union e-mails and meeting agendas that indicated they planned a disturbance.

The group’s attorney Reem Salahi emphasized that a suspension has not yet been implemented but was still disheartened by the report’s recommendations. “It’s collective punishment,” she said. “You have an entire Muslim student body that’s being punished for the actions of a few.”

Egyptian minister: Obama told me he is a Muslim

Obama told me he is still a Muslim, who supports the Muslim agenda. This was a statement by Egyptian Foreign...